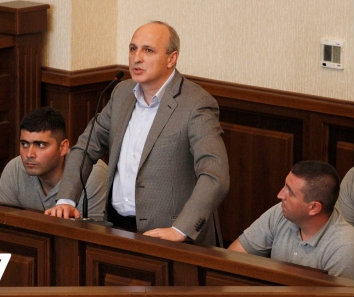 TBILISI, DFWatch–Former Georgian interior minister Vano Merabishvili was Monday sentenced to three years in jail for involvement in the cover-up of the murder of a bank employee in 2006.

Tbilisi City Court found the former minister guilty and also prohibited him from holding any official post for two years. He was charged with abuse of powers and fabrication of evidence; violations of articles 333 and 341 of the Criminal Code.

Former employee of the Interior Ministry, Geronti Alania, who is wanted and was charged in the same case, was partly acquitted but sentenced to four years and six months in jail with an additional 2,000 lari fine. He cannot hold any official post for 2 years and three months.

Valerian Metreveli, who is in detention, was sentenced to four years and six months in jail with an additional 2,000 lari fine.

The Prosecutor’s Office introduced charges against Merabishvili in this case in June, 2013.

Sandro Girgvliani, 28, an employee at Bank of Georgia, was found dead in January, 2006, the night after a scuffle at a restaurant in Tbilisi where Merabishvili’s wife and several Interior Ministry officials were present.

Four policemen were put on trial and convicted, but shortly after pardoned by President Mikheil Saakashvili. This raised serious concerns internationally about the independence of the courts and the justice reforms in general. The picture emerging was that Saakashvili did not want to develop a fair justice system. The European Court of Human Rights found that in the Girgvliani case, all branches of the state had cooperated in order to prevent justice from being done.

Former officials Data Akhalaia and Oleg Melnikov are also charged in the case. The court made a plea agreement with Melnikov, who was set free. Akhalaia is detained in Greece, where a court recently refused to extradite him to Georgia.