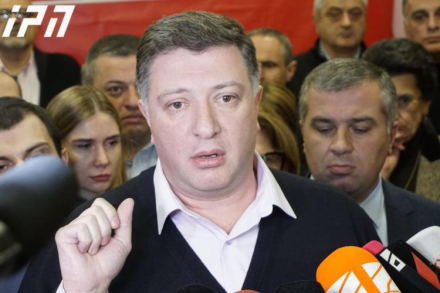 The political confrontation in Georgia hit another low point on Monday after the Supreme Court sentenced Giorgi “Gigi” Ugulava, key opposition politician, to 3 years in jail for diverting public funds during his tenure as Tbilisi Mayor in 2005-2013.

Opposition claims it’s a political persecution and the government led by Georgian Dream is steadily drifting toward downright dictatorship.

Gigi Ugulava received notice about the judgment at the head office of the Labor Party where almost entire spectrum of opposition forces had gathered to discuss electoral reform.

He denied all accusations and said he’d been ready to go to prison.

“The arrests won’t change our stance. We are not going to get into some messy trade with this Gogol character,” Gigi Ugulava said, obviously referring to Bidzina Ivanishvili, Georgian Dream leader. Nikolai Gogol was Russian-Ukrainian writer of 19th century famous for depicting corrupt characters of Tsarist Russia.

Almost all other opposition parties voiced their solidarity to Tbilisi ex-Mayor.

The authorities started prosecution of Gigi Ugulava for corruption soon after Georgian Dream’s landslide victory in 2012 elections. He was arrested twice in 2014 and 2015.

The opposition discontinued all negotiations with government over electoral reform after the court ruling.

Gigi Ugulava was a close ally of former president Mikheil Saakashvili but after his party, United National Movement, lost power their ways departed. In several occasions Saakashvili and Ugulava even traded accusations. Ugulava and his supporters broke ties with UNM in 20017 and set up new political party, European Georgia.