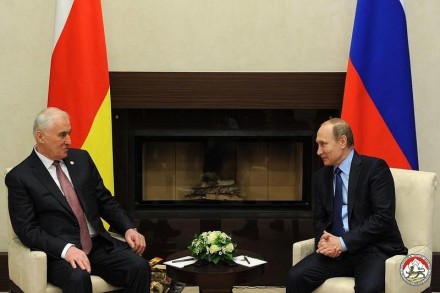 Leonid Tibilov, de facto president meets with Vladimir Putin in Moscow, March 31, 2016. ‘Let’s wait for the moment when “the stars align”, so we can begin to implement the referendum’s results,’ Tibilov was quoted by TASS news agency (http://presidentruo.org/ photo).

TBILISI, DFWatch–Georgia accuses Russia of instrumental use of a South Ossetian initiative to conduct a referendum on joining Russia, while Russia continues sending mixed signals to the Tskhinvali leadership.

South Ossetian hopes for unification with the Russian Federation seem to have reached a new uncertain stage.

Although the idea had long been discussed in South Ossetian society, the initiative gained momentum last autumn when President Leonid Tybylty (better known by the Russian version of his last name Tibilov) announced the government’s plans to hold a referendum on accession to Russia.

Virtually every South Ossetian political force supported the initiative, which is supposed to finalize the breakaway republic’s foreign policy direction of tightening political, economic, and military ties in Russia in order to safeguard its security from the perceived Georgian threat in the aftermath of the 2008 war.

The reports don’t specify whether according to the plans, South Ossetia is supposed to enter the Russian Federation as a separate subject or to unify with the neighbouring republic of North Ossetia–Alania. The second variant enjoys popular support due to cultural and linguistic ties between the republics and the nationalist idea of a ‘united Ossetia’.

Russian news agency TASS reported South Ossetian authorities decided to hold the referendum ‘in August at latest’. A ‘Yes’ vote would result in changing the constitution in a way which would allow South Ossetia to file a formal request to become one of Russia’s federal subjects.

President Tybylty admitted that he didn’t expect Russia to respond to the initiative immediately due to a critical geopolitical context.

“At the present time, based on the situation in the world, we would not want to expose our Russian strategic partner to serious political risks,” Mr Tybylty told TASS.

“I am 100 percent sure that our people will say “yes”. And, of course, with our constitution amended, we can safely turn to Russia’s senior management. Let’s wait for the moment when “the stars align”, so we can begin to implement the referendum’s results,” Tybylty added.

In the same interview, president Tybylty added that it ‘wasn’t ruled out’ that he would seek re-election for the second term.

Several South Ossetian analysts suggested that the referendum might be Tybylty’s attempt to boost his popularity before the presidential elections in 2017 and to score political points with Russia with his loyalty.

“Tybylty’s statement is a PR stunt to demonstrate his loyalty to Russia. Given the fact that there are some ‘rough spots’, Tybylty wants to show that he’s pro-Russian. All the rhetoric of both the president end his entourage is aimed at making the president’s meeting with Putin appear as if their relations were taken to an unprecedented level, and it is clear that Tybylty wants to improve his rankings thanks to this meeting,” Roland Chelækhsaty (Kelekhsayev) told Ekho Kavkaza following the two presidents’ meeting on 31 March.

During the annual Direct Line with Vladimir Putin TV programme, in the course of which the president answers questions from Russia’s citizens, Putin pointed out that Russia couldn’t interfere with initiatives pursued by the South Ossetian government.

“We haven’t discussed this topic [on accession to the Russian Federation] with the president of South Ossetia in detail. He told me his thoughts on the issue, he said that the people of South Ossetia wanted to hold such a referendum and I think we can’t oppose it. We’re not being held back by anything, except the very interests of the South Ossetian people. However, we don’t know yet what will be used as a basis for the referendum or how the questions will be formulated. We will continue our considerations on this issue based on that,” Putin said during the broadcast.

During the same broadcast, however, president Putin pointed out that Russia wasn’t interested in the accession project at the moment. He also blamed former Georgian president Mikheil Saakashvili for the existing situation.

“We’re not considering our relations with South Ossetia in such a context,” Putin said. “I believe that it was a cardinal strategic error on behalf of the former president of Georgia, who initiated the famous armed action, which was fully unjustified, and as a result he lost this territory.”

In his article for Ekho Kavkaza, journalist Murat Gumekukhov points out that in Mr Putin’s statement ‘anyone can hear exactly what they want to’, as it can suggest either Russia’s green light to the accession in case of a ‘Yes’ vote or a polite suggestion that it wasn’t going to happen, at least yet.

Even though there is evidence of dissenting opinions among a part of the society which remains attached to the idea of South Ossetia’s independence, most officials tend to make rather sympathetic statements regarding the unification project. The current political debate doesn’t tend to resolve around the question of ‘if’, but ‘when’.

“Even if the referendum will be held tomorrow and the people speak in favour of unification, it doesn’t mean that the ‘Yes’ vote should be implemented immediately. When Russia is ready, when the international setting allows and when the threat of additional sanctions is reduced to naught, then Russia will be ready to accept South Ossetia,” former South Ossetian speaker of parliament Stanislav Kotsty (Kochiyev) told Ekho Kavkaza.

“I think that this statement shows to a certain extent Vladimir Putin’s willingness to discuss this issue. It means that the referendum won’t be perceived as putting Russia in an uncomfortable position. I was pleased with the announcement. Putin’s restrained answer confronts us with the need to properly think through the issues that will be asked about in the referendum. In fact, there are two options. The first is to raise the issue of a direct entry into Russia as a federal subject, the second is to become a member of a certain union or an allied state. This would be a step towards in future unification, since current external circumstances won’t allow us to solve this question today,” first president of South Ossetia Lyudvig Tsybyrty (Chibirov) said.

Georgia, which considers South Ossetia a part of its territory under Russian occupation and considers the de facto South Ossetian authorities as illegitimate, has repeatedly expressed its discontent with the process.

Members of the Georgian political establishment tend to point out that the initiative is a part of Russia’s plot to influence Georgia’s internal politics.

“This is to some extent a provocative attempt at influencing our internal political processes. This is an attempt to continue the de facto ‘creeping annexation’. Naturally, we will inform the international community about this. We will take all necessary steps to prevent such intensions,” Davit Zalkaliani, Deputy Minister of Foreign Affairs told Ekho Kavkaza.

“This is not a new topic. This so-called referendum has already been discussed so many times that it’s possible to lose count. I’ll repeat what I often say: statements made by the de facto South Ossetian authorities are in this regard very contradictive and it is unclear what it is they really want,” Deputy Minister for Reconciliation and Civic Equality, Ketevan Tsikhelashvili said.

The article discusses developments as seen from South Ossetia which doesn’t imply a position on South Ossetia’s international legal status and might not reflect the view of the publisher. South Ossetian place-names and personal names are transliterated according to how they would be spelled in the Ossetian language.