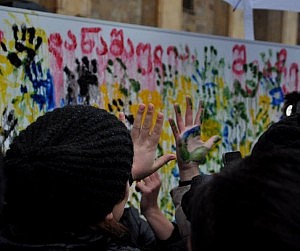 TBILISI, DFWatch–A man was arrested a Tbilisi suburb Wednesday, suspected of slitting his wife’s throat with a knife.

According to the Ministry of Internal Affairs, an investigation has been launched under article 108 of the Criminal Code about premeditated murder.

The case highlights the problem of gender motivated murders of women, what is sometimes called femicide.

Ekaterine Skhiladze, head of the gender equality department at the Ombudsman’s office, told DFWatch that out of 34 murders of women in 2014, half were committed within a domestic violence setting.

The same report says that according to figures from the Chief Prosecutor’s Office, investigations were launched in 26 cases of murder and murder attempts of women in 2015. 14 of those cases were committed within a domestic violence setting, while in 12 cases there were other motives behind the crime.

Ekaterine Skhiladze said after MIA recently launched a campaign against domestic violence, awareness has been raised among people about family violence. More people have filed complaints than in previous years.