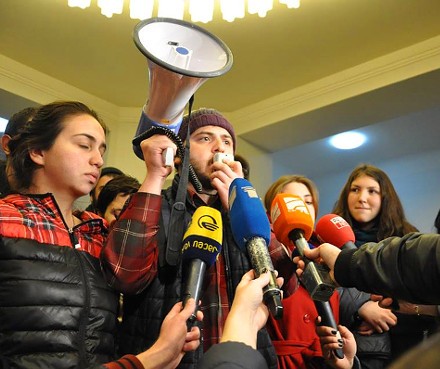 TBILISI, DFWatch–For more than a week, students have been protesting at Tbilisi State University and the tension continues to escalate.

TSU is split in two, with the police and security guards protecting every entrance to the two-wing building occupied by students.

Police and security guards line the main hall inside the entrance. Members of student government, the Tvitmmartveloba, are gathered in the right wing of the building, in the part which houses the rector’s office and the academic council.

In the left wing, the other faction of protesters are gathered called Auditorium 115, named after the room they have made their base. The latter group of students are against the Tvitmmartveloba system, and also want an investigation into the presence of intelligence agents at TSU. Since March 7, they have been occupying the auditorium.

The last few days have been particularly tense, with many clashes and confrontations. The only demand the Tvitmmartveloba group has is that the rector, Lado Papava, should resign. They also believe that the students in the left wing of the building are acting on Papava’s orders. Students in Auditorium 115 want to reform the Tvitmmartveloba system. They believe the members of the student government frequently abuse their power and misspend money provided by the university.

Wednesday, Tvitmmartveloba gave the rector one hour to resign, but he once again declared that he was not planning to go anywhere. Since morning, the two opposing student factions resumed the protesting.

Tuesday was also a tense day filled with meetings and attempts to negotiate.

The Ministry of Education offered to organize a meeting with representatives from all the parties, but students of the left wing refused to come. They demanded that the police must let their supporters inside, who have waited outside in the cold for several days.

Later, the police let the students in, while there were media reports that members of the Tvitmmartveloba faction were helping their supporters from another university’s Tvitmmartveloba sneak inside through an entrance on the ground floor without guards interfering.

In the evening Tuesday, the deputy education minister and the rector met with both sides at TSU. The 115 Auditorium group agreed to leave the building if the others, Tvitmmartveloba, would also leave, as they were promised that their other demands would be considered. But at the next meeting, the president of Tvitmmartveloba said they won’t leave until the rector resigns. He also said that he might go on a hunger strike. 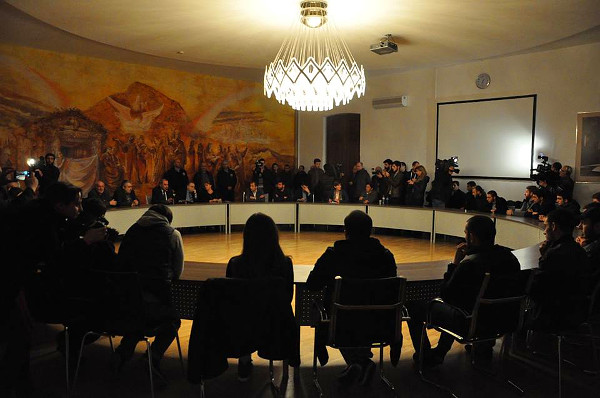