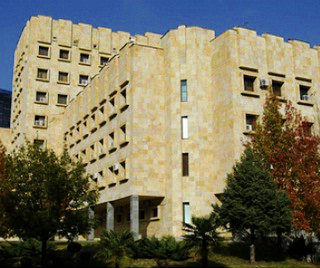 The Prosecutor’s Office in Tbilisi. (Interpressnews.)

TBILISI, DFWatch–A former employee of the paramilitary organization Mkhedrioni who was wanted for four murders was Thursday detained in Azerbaijan, in a joint operation between Georgian and Azerbaijani prosecutors.

The detained woman, Madlena Zvorikina-Berdzenishvili, 65, was head of Mkhedrioni in the Kakheti region in eastern Georgia. She is charged with banditry and organizing the murder of four people.

Mkhedrioni was an armed paramilitary group which terrorized society in the 1990s. It was dissolved in 1995 after a terrorist attack against former President Eduard Shevardnadze. It also organized a coup against President Zviad Gamsakhurdia in early 1992.

The Prosecutor’s Office said she together with several other people founded a paramilitary bandit unit in Gurjaani, Kakheti, in 1993, with a goal to appropriate other people’s property.

She purchased a weapon for the others, provided a fake drivers’ license and fake documents that looked like they were issued by the Interior Ministry, the Security Ministry, Defense Ministry and other bodies, which allowed the group to move freely in Georgia.

She and her allies in Gurjaani attacked the brother of a former employee of the Interior Ministry on August 8-9, 1993, with a goal to hide evidence of murdering two people and appropriating their property. The victim was shot in his car. The same evening, they entered the house of the victim’s brothers, hanged their father and two family members and stole home items and guns from their house.

Tbilisi City Court sentenced her to preliminary detention on June 25, 2014, but the investigation is not yet finished. She may be jailed from eight to 15 years.