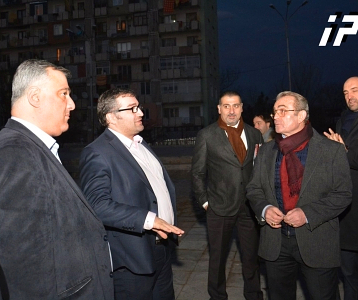 Temur Chkonia (right) discussing the opening of a new McDonald’s in Rustavi earlier in 2016. (Interpressnews.)

The news agency reports that the opening of the first of the chain’s restaurants in Armenia was decided at a meeting of managers in Orlando, U.S.

“I got agreement from McDonald’s main office to open a fast food branch in Armenia,” Chkonia told Sputnik. “Now there will be negotiations with the Armenian government. I am 100% sure that we will open a McDonald’s there. It is only a matter of time.”

Chkonia specified that 1,500 square meters is necessary to build one branch and the plan is to build eight restaurants in Armenia, employing about 1,000 people.

The two South Caucasus neighbors Georgia and Armenia have a long history of rivalry. A number of attempts have been made by Armenians to get a license to build a McDonald’s but it will likely take a Georgian to do it. The fast foods chains KFC, Gyros and Karas are already established there.

In February, Sputnik Armenia wrote that the issue of opening a restaurant in Yerevan was to be discussed at a meeting in Orlando in April. Chkonia said at the time that he was sure that the answer would be positive.

“First of all, many people come from Armenia to Tbilisi to go to McDonald’s. This means that fast food is in high demand among the Armenian population. Secondly, it is possible to open a restaurant in cities with less than 150,000 population.”