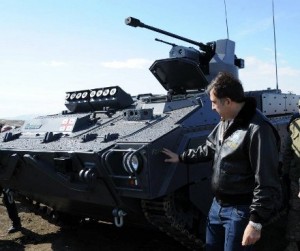 The units sold to UAE will be similar to the infantry combat vehicle Lazika which former President Mikheil Saakashvili presented in 2012.

In January, Delta signed a contract to deliver medevac vehicles worth USD 47 million to Saudi Arabia. That contract was for the vehicle Didgori, a modified Ford F-550 Super Duty truck fitted with armored plates which provide protection from armor-piercing bullets from close range and artillery shell fragments.

The Georgian military columnist Giorgi Inauri points out that Georgia has a potential for increasing its arms trade with low and middle-income countries.

“More calculations are needed regarding Georgia’s high economic potential for selling weapons to for example African countries, whose militaries can’t afford to purchase European, Russian or American products. They will however be happy to buy relatively cheap Georgian commodities,” Inauri told Rezonansi.

Correction: A previous version of this article incorrectly stated that Delta’s new USD 32 million contract was signed with Saudi Arabia, not UAE. We apologize for the mistake.