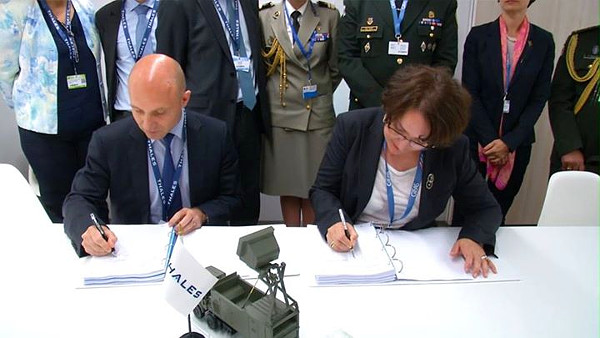 TBILISI, DFWatch–Defense Minister Tina Khidasheli on Monday finally signed a procurement deal with a company in France which is meant to bolster Georgia’s air defenses.

Signing the document in France on June 15, she said the treaty ‘has been subject to so much discussion.’

For even though she thanked both of her predecessors for launching the process, the deal follows seven months of controversy, with a former defense minister accusing his partners in the governing Georgian Dream coalition of wanting to cancel it.

“I want to emphasize that Georgia was offered the possibility of strengthening its security and defense capabilities, which is very important,” Khidasheli said.

“The conditions of the agreement are quite acceptable. I am sure that it is only beginning of a very long process that will lead to the further development of Georgia’s defensive potential.”

But exactly what has happened during that process is disputed. Former Defense Minister Alasania claimed earlier that he was ordered not to sign the deal during a trip to France in late October, 2014. When he did it anyway, several of his staff in the ministry were detained on corruption charges, and Alasania himself was fired shortly after for objecting to the detentions. His party left the coalition.

In the following months, he claimed that the deal was about the expire and that the government was dragging its feet about it.

His replacement, Mindia Janelidze, on his part insisted that the agreement was on track, and when current minister Khidasheli took over, she also assured that the deal was going ahead as planned.

Alasania now says it is unknown what is in the agreement signed by the defense minister. But he believes that parliamentarians will have planned a meeting with her to familiarize themselves with the content.

“For me it is important that the agreement, of which I signed the memorandum, would be implemented 100 percent,” Alasania said.

Janelidze, who was perceived as more of a caretaker minister for half a year until Khidasheli took over, said on Tuesday that the text of the agreement was agreed when he was minister. He said the treaty didn’t even exist when he assumed the minister post.

“There was a letter of intentions, those are two separate documents. The agreement was prepared when I was minister.”

Khidasheli told Georgian Public Broadcaster that she will return to France in a few weeks to sign another agreement.