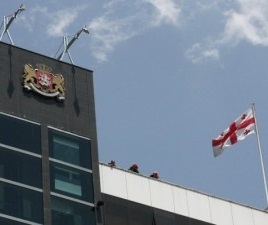 The Defense Ministry issued a statement after one former and four current officials were detained. (Interpressnews.)

TBILISI, DFWatch–The Prosecutor’s Office in Georgia on Tuesday detained five officials at the Defense Ministry and accused them of embezzlement of about USD 2.3 million of the state’s money.

The office accuses them of granting advantages to the communication company Silknet in a competition the ministry announced for building a high speed fiber-optic network.

The Defense Ministry the same day responded by saying that the case has status as top secret and they ask to lift its classified status so that people can be aware of what really happened. The ministry claims that most of the purchases which the ministry is implementing is completely transparent and only a few of them are top secret, including the Silknet case, which they think is important to make public.

According to investigators, the potential criminal offenses took place in 2013 when the employees learned that Silknet was planning to build a fiber-optic highway and attempted to ‘embezzle state money in favor of the company.’ They therefore announced a secret purchasing competition for building the fiber-optic highway and purchase the necessary equipment and asked nine companies about prices for such services, but they were only given a few days to sent the price list, which only four companies were able to do.

The Prosecutor’s Office claims that the five who are accused ‘used all measures’ in order to give advantage to Silknet and let it win the secret tender. December 26, 2013 Silknet and the Defense Ministry signed an agreement about purchasing the required equipment, installation and other services for which the ministry should pay more than 6.7 million laris to the company and the company should implement the service by January 16, 2015.

But according to an expert report about market prices, the price of the services in the contract have a value of about 2.6 million laris. So in the end the five detainees are accused of embezzling 4,102,872 laris, which is about USD 2.3 million.

The detainees may face from seven to eleven years in jail.

The Defense Ministry responded in a statement that the purchasing system of the is ‘maximally transparent’ and some NGOs even attend tender commission sessions as observers. The ministry writes that this year only, 16 percent of purchases are top secret, compared to 74 percent in 2012.

But even in cases when there are secret purchases, the ministry asks about prices, despite the fact that the ministry has a right to hold negotiations with only one company. That is what happened in this case, the ministry explains; it asked for maximum prices and proposals to a number of companies, but since this purchase is top secret, the ministry wants to lift its classified status in order to have a transparent investigation.