Alasania details how air defense treaty with France was stopped

Alasania details how air defense treaty with France was stopped 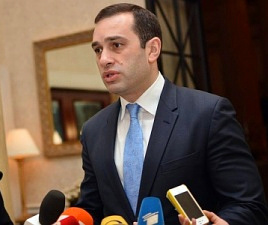 TBILISI, DFWatch–Former Defense Minister Irakli Alasania accuses the government of having failed to implement an air defense treaty with France and proposes setting up a parliamentary investigation commission to look into it.

Alasania Friday made true on his promise to hold a press conference and offer more details.

The case centers on an agreement he was supposed to sign on a trip to France in November, 2014, while he was defense minister. Alasania claims that one of his subordinates Mindia Janelidze, who later replaced him as minister, called him and asked not to sign the treaty.

Alasania signed it anyway, and the same day, five employees at his ministry were detained and accused of embezzlement. This led to a crisis that eventually caused a split in the government coalition and almost cost it its majority in parliament.

The ex-defense minister said Friday that he had waited with telling the story until now because he was hoping that the treaty would come into force, but now it has expired and the ‘chance is missed.’

Describing the visit to France in more detail, he said he arrived on October 27 and received the controversial call from Janelidze on 28, the day he was supposed to sign the long-prepared treaty. Despite the request from the PM not to sign it, Alasania signed it ‘as promised,’ he explained. He further explained that he didn’t want to miss such a chance, such a new opportunity for Georgia.

“I signed it and was awaiting the implementation of this treaty for six months, but it never happened,” he said.

The day he signed the treaty, five employees of the Defense Ministry were detained, accused of embezzlement in connection with a contract with Silknet for building high-speed Internet, charges he suspects were brought because he refused to sign the treaty.

“When I asked [about] the reason for the detention, I couldn’t get an answer and the Prosecutor General’s Office remorselessly continued its politically motivated persecution of the Free Democrats and its leader.”

He was asked whether the government’s decision was made based on Russia’s possible critical position toward the air defense treaty. To this, he answered that it would be logical to see ‘cause and effect’ results here.

The Free Democrats is now bringing the French air defense treaty up in parliament and asking to create a commission to investigate what happened and answer questions related to the treaty.