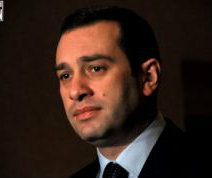 Irakli Alasania said he believes his dismissal was political. (Interpressnews.)

The sacked minister, Irakli Alasania, was one of the most pro-western members of the coalition government which came to power after the parliamentary election in 2012. He called his dismissal an ‘attack on Georgia’s Euro Atlantic integration’ and said he thinks it was political.

One more minister, who is a member of Alasania’s Free Democrats Party, resigned in protest: Alexi Petriasvhili, the minister for Euro Atlantic integration.

In a short announcement, Garibashvili spoke about the charges against Defense Ministry officials and said that Alasania had attempted to ‘politicize’ the cases instead of cooperating with the investigation.

The PM called it ‘irresponsible’ what Alasania said, that the Prosecutor’s Office actions is an attack on Georgia’s Euro Atlantic integration.

Alasania was appointed defense minister in 2012. He served as Georgia’s ambassador to the United Nations from 2006 to 2008, and before that he was advisor to ex-President Mikheil Saakashvili, working with the conflict with Georgia’s breakaway regions.

According to the most recent poll done by National Democratic Institute, a U.S. publicly funded organization, Alasania was the most liked minister with 60 percent approval rating, followed by the PM with 54 percent. In the days since the Prosecutor’s Office introduced the first charges against his ministry officials, a number of western diplomats have made statements in support of Alasania, emphasizing the successful reforms he has overseen.

Without Alasania and Petriashvili, the Free Democrats, which is a member of the governing Georgian Dream coalition, has two of their people left in the government: Justice Minister Tsulukiani, who has not been a formal member of the party after she became a minister, and Foreign Minister Maia Panjikidze, who is the sister of Alasania’s wife.

Alasania responded by saying that the decision was unexpected, but not illogical. Appearing on the program Archevani on Rustavi 2 TV, he said today he saw a prosecutor instead of a prime minister.

“And my suspicion that the entire action was planned to discredit the image of the defense minister, was reinforced,” he said.

He noted that from now on he is no longer an official and a new phase starts for him and his party, so he will fight till the end to prove the innocence of the ministry officials who are charged with corruption.

“Dictatorship is getting closer, democracy is in danger,” Petriashvili said half jokingly, mocking Eduard Shevardnadze’s voice, apparently referring to his famous statement of 1990 before resigning from the office of Minister of Foreign Affairs of the USSR. Petriashvili added that he’d learned from TV that his friend and colleague Alasania was dismissed, so tomorrow he will ask the PM for his own resignation.