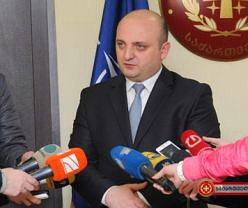 TBILISI, DFWatch–Georgian Defense Minister Mindia Janelidze explained in parliament Wednesday that a defense deal with France has not been put on hold.

His predecessor Irakli Alasania accused the government of halting the planned installation of new air defenses, but Janelidze assured MPs that the government is carrying out negotiations with several countries to improve Georgia’s air defense capability, including France.

He was answering questions in parliament’s defense and security committee, where also the Free Democrats party is represented.

The defense minister said that the development of the country’s air defense system has not been interrupted, but that the government is in negotiations with several countries. He didn’t specify which ones, but only said that they include France.

He also said that foreign experts and partners are assisting in the ‘transformation of the defense systems.’

“Our goal is that Georgia’s armed forces get high tech air defense systems, in order to protect the country’s air space from threats.”

Janelidze underlined that in every area of Georgia-France bilateral relations, the cooperation is continuing and nothing has changed.

Alasania, who was dismissed in November, last week claimed that the document he signed in France on one of his final days as minister has expired and that the government did nothing to prevent the deal from being canceled. He openly accused the government of acting against the interests of the country’s security, and his party, the Free Democrats, demands that parliament creates a commission to investigate the issue.

So far a commission has not yet been created, but MPs from the ruling coalition have declared that they not in favor of setting it up, while the rest of the parliamentarians don’t control enough seats to make a decision without the support of the coalition.

The opposition, which includes the Free Democrats and the former ruling party, the National Movement, refuse to believe his words until they see ‘concrete steps.’