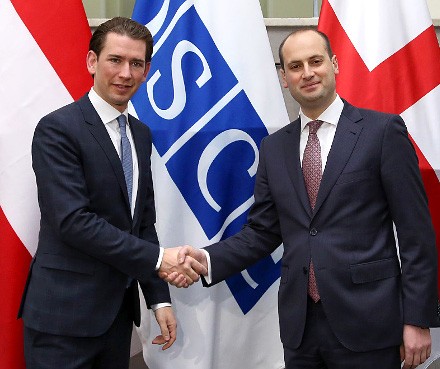 Austrian Foreign Minister Sebastian Kurz meets his Georgian counterpart during a visit to Tbilisi on February 3, 2017. (Ministry of Foreign Affairs of Georgia.)

TBILISI, DFWatch–Georgia distances itself from a controversial statement by the Austrian minister of foreign affairs, who proposed establishing refugees’ centers outside the borders of the EU, including in Georgia.

“There are no plans to set up refugee camps in Georgia,” the Georgian minister for IDPs, accommodation and refugees told journalists on Monday, adding that doing so would not be a topic for discussion.

“We have 274,000 internally displaced persons inside the country, of which about two-thirds have not yet been given a dwelling, and therefore our country can’t assume any obligations in this regard,” Sozar Subari added.

Georgian’s Foreign Ministry said that redistributing migrants caught trying to illegally enter the EU has never been raised with Georgia.

“This issue has not been mentioned by Mr Kurz neither during his Georgia visit [last month] nor elsewhere”, the Ministry of Foreign Affairs said, quoted by Agenda.ge.

“We need refugee centers outside the EU,” Austria’s Federal Minister for Europe, Integration and Foreign Affairs Sebastian Kurz said in an interview with the German newspaper Bild, suggesting Georgia, Egypt and Balkan states as possible locations of such centers.

Kurz is a member of the conservative Austrian People’s Party and known for criticizing the EU’s refugee policies.