PACE to discuss dismissing its president in October

PACE to discuss dismissing its president in October 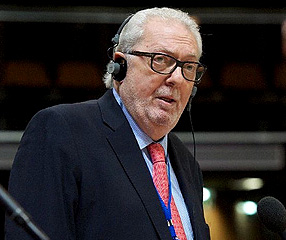 TBILISI, DFWatch–The Parliamentary Assembly of the Council of Europe (PACE) will discuss a proposal to dismiss its chairperson in early October after a motion was tabled on Friday.

The motion to dismiss PACE President Pedro Agramunt was backed by 158 out of the 636 member assembly.

It is signed by members of five political party groups and representing 36 different countries. Among the signatories are four members of the Georgian and five members of the Armenian delegation.

None of the members of the Russian or Azerbaijani delegations backed the motion.

The proposal will be discussed at the session that starts.

Agramunt caused controversy after he traveled to war-torn Syria in April and met with President Bashar al-Assad. Earlier, when Agramunt was PACE rapporteur on political prisoners in Azerbaijan, human rights activists criticized him for being close to the regime in Azerbaijan, and pointed out that did little to highlight the numerous violations of human rights there.

The assembly will discuss the motion at its session in Strasbourg which starts on October 9. Until then, Agramunt will cease to chair the assembly meetings. says a news statement published on the PACE website.