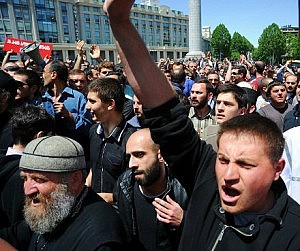 Thousands of Orthodox Christians attacked gay rights activists in Tbilisi on May 17, 2013. (Interpressnews.)

TBILISI, DFWatch–Georgia passed a law against discrimination three years ago, and in return the European Union gave its citizens visa-free travel to Europe. But the local human rights watchdog now says the anti-discrimination law is not being fully implemented.

The law on Elimination of All Forms of Discrimination was passed by parliament in spring of 2014 as a requirement by the European Union for Georgia to get visa-free access to the Schengen area.

“Nearly three years after the adoption of the law, there are still problematic issues, which pose obstacles to its effective implementation,” the Public Defender of Georgia writes in the latest annual report, which covers the year 2016.

Earlier this week, Georgians celebrated that they finally can travel without a visa to most of Europe from March 28. But the ombudsman points out that three years after the anti-discrimination law was passed the government is not effectively implementing it.

The Public Defender has tried to warn against the Georgian Dream government’s foot-dragging about the anti-discrimination law before. In 2015, PDG proposed a so-called first wave of amendments to make it stronger. The office has also argued that the law needs to be followed up by the government by an active information strategy. In the last annual report, for the year 2015, he proposed measures for raising awareness and creating a tolerant environment in schools. Both are proposals that the government has yet to act on.

But the government is also under pressure from the other side, by people who think the law went too far, with one member of parliament even proposing in September 2015 to remove that part of the law mentioning sexual minorities. For a section of Georgian society, the law was controversial when it was passed, especially the part which deals with sexual minorities, in a country that to a large degree is religiously devout and conservative.

When researchers have tried to look into what may be causing a reaction, they found that when asked, Georgians are not against gay rights per se, but dislike having to deal with the issue in a public setting. An opinion poll last summer showed that Georgians on the whole support the rights of gays, lesbians and other sexual minorities, but the majority of them dislike seeing gay rights rallies and other manifestations of a lifestyle they consider threatening to the social order.

Among the Orthodox Church, the prevailing view is that the LGBTQ cause is a form of cultural imperialism pushed by Europe and the West, that threatens to undermine traditional family values. Many Georgians remember the events of May 2013, when a group of LGBTQ activists were violently attacked by a crowd of thousands of Orthodox Christians in the center of Tbilisi.

The gay rights issue has worked to distance Georgians from its Western allies, and recently a delegation of Georgian priests visited NATO headquarters in Brussels. Returning from the trip, the priests had learned that the EU is not against a constitutional ban on gay marriage.

Another important human rights challenge in Georgia in 2016 was violations of the rights of children. The measures taken to combat child abuse, extreme poverty and other violations of the rights of children are not sufficient, the report states. In addition, there remains the ingrained problems of child poverty and inadequate living conditions, which in turn leads to problems for the children as they develop, also in terms of nutrition.

Other challenges are prisoner abuse and police brutality.

“Once again, there is an acute problem of ill-treatment of people detained by the police,” Public Defender Ucha Nanuashvili said as he presented the new report on Saturday.

Women’s rights have been put on the agenda in the last year, following an awareness of the extent of violence against women. There have been calls to name femicide as a specific crime in the Criminal Code, most recently by the Republican Party.

The POG annual report is a survey of how well the country is protecting human rights and freedoms over the course of the preceding year.

“In 2016, the government carried out reforms in the justice system and law enforcement agencies according to commitments taken at international and national levels,” Nanuashvili said.

The report also criticized an amendment to a law regulating secret surveillance,  adopted by the parliament in March.

“The amendments are not in line with the Constitutional Court’s decision and can not be referred to as a guarantee against unjustified interference in people’s private lives.”

The report says that violations revealed during 2016 parliamentary elections couldn’t influence results of the ballot.

POG received 8,827 complaints about violations of human rights last year; slightly higher than the two preceding years when the number of complaints was less than seven thousand. POG’s reports explains the increase with more awareness and higher expectations among people regarding the complaints mechanism.