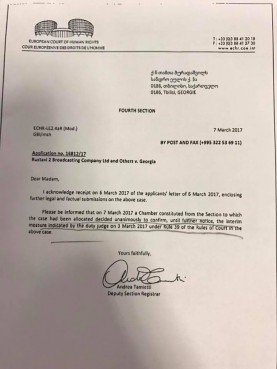 TBILISI, DFWatch–The European Court of Human Rights on Tuesday confirmed a decision by one of its judges to suspend a ruling by Georgia’s Supreme Court about changing the ownership of the opposition-leaning TV company Rustavi 2.

“A Chamber constituted from the Section to which the case had been allocated decided unanimously to confirm, until further notice, the interim measure indicated by the duty judge on March 3, 2017,” the ECHR wrote in a letter published on Facebook by Rustavi 2 director Nika Gvaramia.