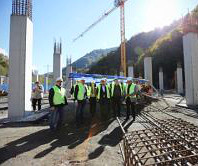 A new mineral water factory under construction in the Guria region with EBRD financing. (Interpressnews.)

TBILISI, DFWatch–Direct foreign investments in Georgia was 33 percent lower in the third quarter of 2015 than in the same period last year, according to preliminary data from the National Statistics Department.

Direct foreign investments amounted to USD 489 million in the third quarter, according to the report published on Wednesday. The total amount in the first three quarters was USD 1,019 million, which is 17 percent less than last year.

In the measured period, some of the largest originating countries were Azerbaijan – USD 173 million, the Netherlands – USD 55 million, Turkey – USD 43 million, UK – USD 41 million and China – USD 40 million. Also near the top of the list were Luxemburg, the United States, Czech Republic and Russia.

The top sectors in terms of investments in the third quarter were transport and communication, the finance sector and construction.