The same man voting three times in polling station No. 03/11 in Shengavit, Yerevan. Pictures by Bianca Bernardi for the Citizen Observer Initiative.

Widespread electoral fraud allegations and the growing gap between the political élites and the society confirm worrying trends in Armenia’s democratic development.

On Sunday, 6 December a nationwide constitutional referendum was held in Armenia.

Numerous reports stated that due to electoral fraud, violence, and coercion used to secure the ‘Yes’ vote, the referendum can’t be considered legitimate.

According to the official data, 66.2% voters said yes to the proposed changes, which include transforming the country’s political system from a presidential to a parliamentary republic, abolishing direct presidential elections, and transferring the power of commander-in-chief from president to prime minister.

Although the proposed changes were endorsed by constitutional law experts from the Venice Commission of the Council of Europe, Armenian ‘No’ campaigners pointed out they constitute an attempt by president Serzh Sargsyan to stay in power following the end of his second and final term in 2018.

The political aspect of the changes has striking similarities to Georgia’s 2013 constitutional reform, which transferred major powers from president to prime minister. Likewise, critics had accused the then-ruling United National Movement party of tailoring the law in a way that would have allowed president Mikheil Saakashvili to maintain his grip on power.

The Armenian referendum idea goes back to 2013, when president Serzh Sargsyan announced his intent to amend the country’s constitution. Mr Sargsyan’s announcement came only one day after his sudden declaration of Armenia’s intent to join the Russia–led Eurasian Customs Union, which prevented the country from signing the European Union Association Agreement and reoriented Armenia’s foreign policy course towards the so-called ‘Eurasian structures’.

The system change mitigates a possible crisis of succession. A parliamentary system technically allows a prime minister to stay in power indefinitely and is more resilient to political turbulence than a presidential system, as the ousting of Ukraine’s president Viktor Yanukovych in 2014 demonstrated. Without the constitutional amendments, Serzh Sargsyan’s defeat in 2018 elections could have meant a series of unexpected foreign policy readjustments which aren’t in the interest of Russia — Armenia’s major political, economic, and military partner.

The importance of constitutional amendments for political predictability inside the Eurasian Customs Union might be the key factor explaining the determination of the ruling Republican Party of Armenia to ensure the ‘Yes’ vote by means of bribery, coercion, and electoral fraud.

Accordingly, chairman of the Russian Central Electoral Commission Vladimir Churov announced that representatives of the Russian monitoring mission had ‘not registered any violations or incidents during the referendum’. 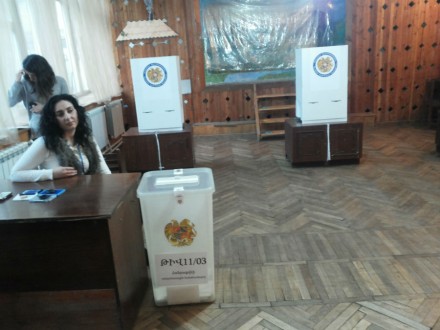 Artur Avtandilyan, communications coordinator of Transparency International in Armenia told DF Watch that ‘[i]f there had been a greater interest from the international community, more pressure on Armenian authorities to accept more international observers could have been exercised. The referendum on a new constitution which transformed the political system of Armenia shouldn’t have been neglected.’

The Citizen Observer Initiative and the European Platform for Democratic Elections issued a joint statement which reads that ‘the referendum results do not reflect the free will of Armenian citizens and should not be considered to be legitimate’ due to the high number of violations and crime.

Members of the Citizen Observer Initiative who monitored the voting process on ground reported outright attempts at rigging the referendum. The violations included manipulations of the voter lists, intimidation of voters and observers, vote buying, falsification of protocols, and ballot box stuffing. Proxies of the Republican Party obstructed the work of observers and engaged in instruction of voters in and outside of the polling stations. A number of observers and journalists were physically assaulted or threatened with violence. In most extreme cases, electricity at some polling stations was shut down during the counting of votes to ensure swift shifting of the ballots. A couple of polling stations recorded the suspicious zero number of ‘No’ votes.

‘The referendum is completely illegitimate’, Babken DerGrigorian, one of the coordinators of the Citizen Observer Initiative, told DF Watch. ‘There were a number of polling stations that finished the count early to discover that the “No” vote was winning by a huge margin. By 11 p.m. we started to get reports of lights being turned off, chairmen delaying the counting of votes, or outright ballot box stuffing. The chairmen were clearly being pressured by people connected to the Republican Party to deliver the “Yes” vote. They were given the green light to whatever it takes to secure it.’ 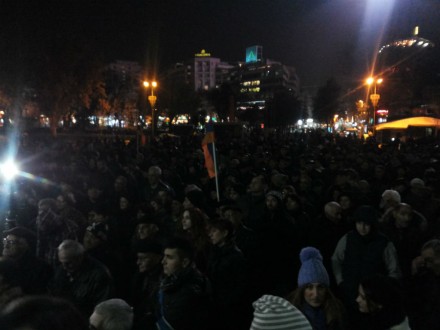 An opposition rally on 7 December. Picture by DF Watch.

‘Everyone was expecting the “No” to win. The fact that the vote wasn’t fair reinforces destructive cynicism within the society. Many people refuse to engage in civic activism saying mek e, ban chi pokhvelu (‘anyway, nothing is going to change’). After yesterday events, I have no response to that. The referendum reinforced the cynics and demoralised the hopeful’, Mr DerGrigorian added.

Independent expert Artyom Mkrtchyan offered a different assessment of the events of 6 December:

‘The released statement by the European Platform for Democratic Elections highlights the list of deficiencies noticed on the voting day — which are symptomatic for most post-soviet states and Armenia as well. The outlined “problems”, as they call them, have been registered in all recent elections with varying degree of intensity. Those shortcomings traditionally are in the focus of some observers, like those of OPDE. A number of other delegations conducting observation missions during the referendum, among them the Commonwealth of Independent States Mission — by the way, the largest and the most representative one — have generated different opinions. General references to the opinion of international observers should be made only through comparing and reconciling all the views and assessments expressed. I hope much that law enforcement bodies will properly investigate all the reported cases of voting irregularities. However, the core question is whether the alleged irregularities and violations have substantively affected the results to doubt the final outcome’, Mr Mkrtchyan told DF Watch.

On the following day, the main opposition party Heritage led by former presidential candidate Raffi Hovhannisyan and the Nor Hayastan (‘New Armenia’) movement held rallies on Yerevan’s Liberty Square demanding invalidation of the referendum and resignation of president Serzh Sargsyan.

Mr Mkrtchyan told DF Watch that he did not ‘share the pessimism about the prospects of the new constitution dominating in some oppositional circles, but I am rather inclined to view the new system as yet another opportunity at least for the opposition to reorganise and consolidate itself for a meaningful and organised struggle with the power’, Mr Mkrtchyan added.

Ms Avedissian tweeted a number of comments on the rally, which can be paraphrased in the following statement:

‘The rally is a sign that people need to outlet their frustration and that they are hungry for an alternative. Raffi Hovhannisyan can only tentatively plan future rallies, because his party has no real plan. Speakers in such rallies make old kind of statements to mostly passive audience. If there is a future, it’s not with them. Electric Yerevan, though extent of their success is arguable, was the strongest manifestation of a new paradigm of Armenian politics — young, subversive, and creative, rejecting the wholesale systemic exploitation that characterises this regime. It remains to be seen what this youth can do, but I’m convinced they are going to be at the forefront of any political change in Armenia’. 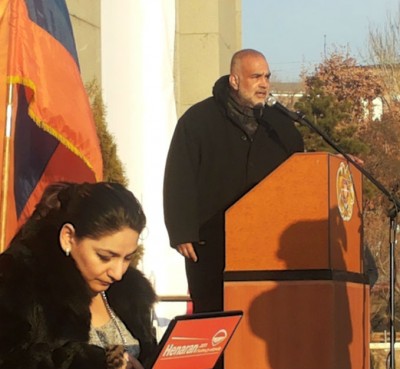 With the Electric Yerevan–induced enthusiasm losing its momentum, the chances for a real political change in Armenia are becoming increasingly bleak. The fraudulent referendum weakened the democratic foundations of the Armenian state and cemented the cynicism and frustration within the society by enforcing a political system that enjoys little legitimacy.

At the same time, the increasing influence of Russia combined with the weakness of opposition parties enforced by their leader-centeredness and nonideological political programmes doesn’t leave much hope for emergence of viable alternatives to the current regime in the nearest future.

No matter whether the Armenian electorate would have chosen to say ‘Yes’ or ‘No’ to the amendments, which don’t necessarily constitute a threat per se, as the example of Georgia shows, 6 December marks the day when the Armenian government made the decision for the society in the most degrading way, turning years of democratic development and the established rules of play into a sham.