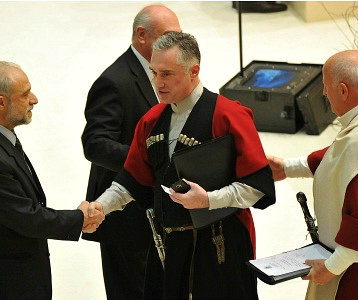 Zviad Dzidziguri from the Conservative Party wearing the Chokha with sword in parliament. (Interpressnews.)

TBILISI, DFWatch–Parliament is considering banning the carrying of swords of the type belonging to the Georgian national costume Chokha.

A few days ago, two teenage boys were injured when two others dressed in Chokha drew swords on them at Pushkin Square in Tbilisi.

According to witnesses, the sword-wielding Chokha-wearers were under the influence of alcohol. One of the victims was injured in the face; the other one received more serious injuries. They both remain in hospital.

On Tuesday, parliament reviewed a legislative proposal from the Interior Ministry which will introduce a ban on carrying a so-called cold weapon in public places.

According to draft, carrying a cold weapon in public will be punished by a 200 lari (USD 120) fine the first time. In case of repeat offenses, the fine will be increased to 1 000 lari (USD 600) or fifteen days of community service.

During the review of the draft Vakhtang Khmaladze, chairman of the judiciary committee, recalled the incident in Pushkin Square and asked how the law ought to work in regard to the National Chokha, which includes wearing a quite large swords.

MPs from the Conservative Party disagreed and said that there have been many cases when people just hit a bottle over the head of someone while drunk and parliament should therefore also prohibit the carrying of bottles and many other items.

Levan Izoria, Deputy Interior Minister, remarked that prohibiting the sword of the national clothing would not be compatible with traditions. He said that the way to avoid incidents such as the one that took place at Pushkin Square is through the work of law enforcers.