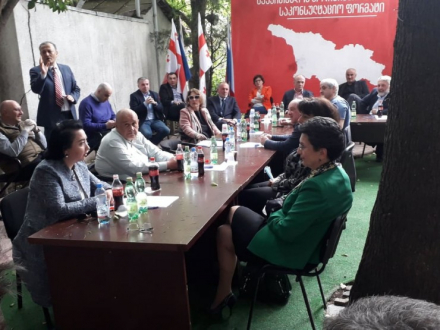 Political conflict in Georgia over electoral reform has escalated again amid disagreement between the government and main opposition forces, as the latter accuses the Georgian Dream of renouncing an agreement struck in March 8. The tension is so high some opposition politicians threaten to resume protest rallies despite Covid 19 restrictions.

In particular, the government, it seems, is reluctant to free three persons who the opposition claims are political prisoners and whose release was part of the deal mediated by Western diplomats.

The Georgian Dream, in turn, blames the opposition of misinterpreting the deal, which, it claims, doesn’t include prisoners’ release.

The GD officials flatly rebuff any notion of a deal over prisoners’ release, claiming that they can’t intervene into affairs of judiciary.

“This should not be allowed, we’ve got rid such a practice from everyday political life long time ago,” said Giorgi Volski, the parliament vice-speaker.

Although the March 8 deal doesn’t specify prisoners’ release, all opposition parties and many political commentators argue that it was a pretext of the agreement.

Some opposition politicians even threaten to hold protest rallies despite a curfew and other restrictions imposed amid Covid 19 outbreak.

“The current epidemiological situation, in my opinion, allows us to plan various types of protests, including those observing social distances, […] to force Ivanishvili to comply with the March 8 agreement,” United National Movement MP Tinatin Bokuchava said.