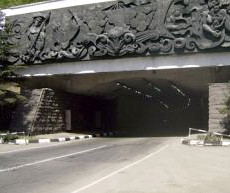 The regional development minister said Thursday during the Silk Road Forum that passing a road through Rikoti may be subject to a fee under an investment plan by Chinese companies.

The existing tunnel, which was built during the Soviet Union, has been undergoing repair work the last few years, and has been closed for periods, forcing drivers instead to use a winding mountain road.

Regional Development and Infrastructure Minister Nodar Javakhishvili told journalists on the first day of the conference that Rikoti Pass is very important and needs investments.

The forum in Tbilisi involves delegations from 31 countries and 20 international finance or donor organizations, including a delegation from China.

If the Chinese decide to invest in Georgia, there will also necessarily be more Chinese goods moving around on Georgian highways.

“We may agree on this for 30 to 50 years, and if we agree and they construct a road and manage it for this period, then this will be a paid road and investments will be returned,” he said.

Later on Thursday, Interpressnews quoted a spokesperson for the Infrastructure Ministry saying that the main road will only become a toll road if there exists an alternative road.

The ministry said that if there is a toll road, it will unload the highway and transit traffic will have better conditions, which will be beneficial for the country.

Economic relations between Georgia and China have strengthened during the last year, with more Chinese companies looking to carry out projects in Georgia. Minister of Economy Dimitri Kumsishvili said in an interview with the public broadcaster’s news program Moambe on Thursday that Georgia probably will sign a memorandum with China on November 11 to start negotiations about a free trade agreement.