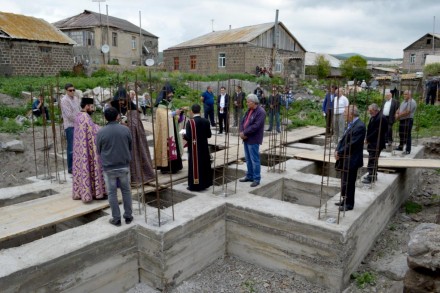 Opening of the construction (armenianchurch.ge)

Javakheti’s Armenian community celebrated the opening of a new church in the village of Didi Aragiali.

A ceremony of opening a new church in the village of Didi Aragiali of Ninotsminda municipality inhabited by ethnic Armenian majority was held on 13 October, news portal jnews.ge reports. The church bears name Surb Khach (‘Holy Cross’) and was opened by representatives of the Armenian Apostolic Church in Georgia.

The opening and consecration ceremony was led by the head of the Georgian Diocese of the Armenian Apostolic Church, bishop Vazgen Mirzakhanyan.

The first service was attended by the heads of Ninotsminda and Akhalkalaki municipal governments as well as guests from Armenia and the Russian Federation.

Construction of the church began in the summer of 2014 with financial support of Russia-based philanthropists Artur Isoyan and Aida Sanosyan-Isoyan, who were born in Didi Aragiali.

The Georgian diocese of the Armenian Apostolic Church has jurisdiction over two churches in Tbilisi, forty-two churches in Samtskhe–Javakheti, nine churches in Kvemo Kartli, and one church in Batumi.