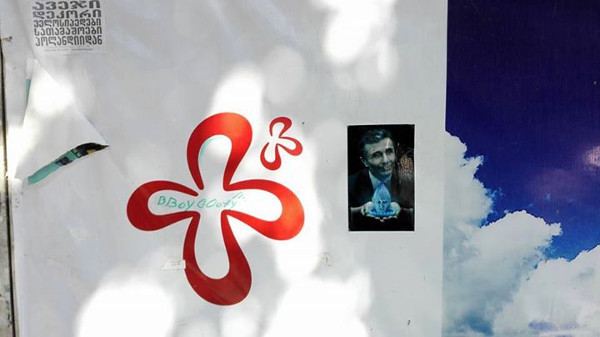 TBILISI, DFWatch–Police in Georgia on Friday detained an opposition-leaning journalist for putting up a poster mocking billionaire Bidzina Ivanishvili.

Tamar Chergoleishvili, founder of a television company strongly supportive of the National Movement, was detained with two others as they stuck a poster on a construction fence at Tbilisi Opera in the center of the capital.

The founder of Tabula TV was charged with an administrative offense, along with the other two detainees, chief producer Lekso Machavariani and Salome Khvadagiani, a student, Tabula reports.

The three were taken to the police station and accused of vandalizing the opera building’s facade, but later released after signing written statements.

The poster criticized Ivanishvili and the government’s plans to negotiate with Gazprom about increasing the supply of natural gas from Russia.

Ivanishvili was prime minister for the first year of Georgian Dream’s government and is regarded as a powerful figure who has the final say in the government’s most important decisions.

Reviving ties with Gazprom, a Russian state-owned company, is controversial in Georgia, which fought a brief war with its northern neighbor in 2008. The UNM reacted with outrage over the news, and President Giorgi Margvelashvili also expressed concern and demanded high-level discussions about Georgia’s energy security.

Before the detention of Chergoleishvili and two others, student activists protested in front of the government office, claiming that the negotiations with Gazprom are a threat to the country.

The student activists were planning to hang posters throughout Tbilisi and a rally is planned on Saturday.

Tabula started as a weekly magazine with strong pro-UNM views and later began TV broadcasts on a license previously used by TV Sakartvelo.

Chergoleishvili is the wife of Giga Bokeria, one of UNM’s most high profile politicians who was secretary of Georgia’s National Security Council during Saakashvili’s presidency.