Carpenter: Not only sanctions… the US & NATO can take military steps to gain advantage over Russia in the region

Carpenter: Not only sanctions… the US & NATO can take military steps to gain advantage over Russia in the region 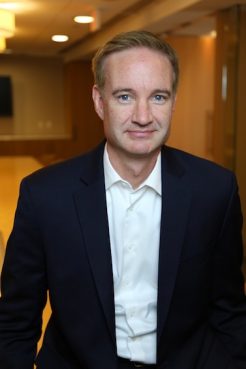 Michael Carpenter: I know the lead drafter of the national security strategy Nadia Schadlow at the National Security Council. She is a very smart individual, very seasoned and with good expertise necessary to be able to craft this sort of the document.

VoA: Some officials from the Administration are saying the main notion of this document is “competition.” The new strategy places the US as a competitor. How would you define this concept of  “competition”?

M.C: I presume it is a competition for status, economic resources and military power.  I think it is unfortunate that this administration – by its actions – is actually undermining the US leadership in international liberal order, which emerged after WWII, known as the Bretton-Woods System. It emphasizes on democracy and human rights. These values have been downplayed in favor of more realpolitik understanding that all nations will pursue their own interests and that the United States should remain disengaged. At least, that is what president Trump has said personally and I find it at odds with every administration, at least since the WWII.

VoA: What should the US national security priorities be in regards with Russia and Ukraine?

M.C: In regards to Russia, the priority clearly should be to impose costs that would prevent Russian revanchism. We know that Russia used military force in Georgia in 2008. It used military force in Ukraine in 2014. The long-term consequences for Moscow should be that Kremlin looks back at its adventurism in both of these countries and understands that the costs were greater than the benefits.

So far, it is not clear if the costs exceed benefits in both cases. I think it is incumbent on the US to demonstrate leadership and to show Russia that the cost will – in fact – be greater and that this sort of military adventurism will not stand in the future.

VoA: When you mention ‘costs,’ do you mean economic sanctions?

M.C: I do not mean only economic sanctions. There are military steps that the United States and NATO can take in order to gain advantage over Russia in the region. There is clearly a role of training programs to be implemented in Georgia and Ukraine. That is something we did when I was in the Pentagon. However, here I think we are talking about a combination of economic sanctions and diplomatic pressure. We are talking about a range of actions that would eventually undermine Russia’s malign influence across the entire region.

VoA: You co-authored a paper with former Vice President Joe Biden. In the article, you argue that Western democracies have always been a role model for post-communist countries, but today using its propaganda efforts Russia is undermining the West.  Considering recent events like Brexit, strengthening of rightwing movements in Europe, internal political drama in the United States – do you think Western countries still have a moral advantage?

M.C: A message the Kremlin is trying to send is that liberal democracy is not really the best solution to all the challenges we face in the 21st century. And, that there are other models or other paths equally adept at protecting national interests. I think that is false. We have seen that over the long run, liberal democracies are the most resilient, the most prosperous, and the most secure.

Of course, we are facing challenges; all the ones you mentioned – migration, Brexit, growth of nationalism, populism.  All of these things are real. But, in a long run, we will find that these systems are more competitive and more resilient than we see now. The Kremlin’s strategy is to undermine these democracies from within and that what I discussed with Vice President Biden in the article you mentioned.

VoA: In the same article, you say that the dream to transform Russia into a democratic, stable state is now more distant than it has ever been since the end of the Cold War. Do you think that dream is still realistic – is there hope for a democratic Russia?

M.C: Sure, the dream is still there. You cannot say that Russia is doomed to be an authoritarian state forever. I do not believe in that. However, as we say, the dream is more distant now than it has ever been because of consolidation of repressive power in Russia under Vladimir Putin. He has strengthened repressive state apparatus and political opposition in Russia is marginalized. For right now, it does not look like Russia is on a verge of democratic breakthrough, and looks like we are in a period of stagnation. However, time will come, when the leadership will change and civil society will grow.  And eventually, Russia may change again.