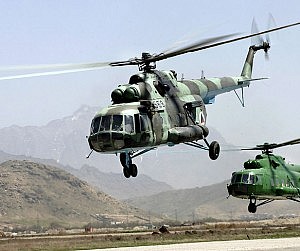 A Russian helicopter of this type flew over Georgian-controlled territory on December 10. (U.S. Department of Defense.)

TBILISI, DFWatch–An alleged New Year’s terror plot by Islamic State and an airspace violation by a Russian helicopter were some one of the topics at a regular field meeting about the conflict over the breakaway territory South Ossetia on Wednesday.

The meeting of the Incident Prevention and Response Mechanisms took place in Ergneti, right on the delineation line from the war in 2008, and is meant as a safety valve to solve practical problems in the areas near the zone of conflict.

Goga Aptsiauri, a journalist working for Radio Liberty Georgia, reported that Davit Sanakoyev, who heads the Ossetian delegation at IPRM meetings, claimed that Islamic State militants are mobilized in Pankisi Gorge, an area in the northeast of Georgia, and are preparing to create danger for the Russian military base and border guards located inside South Ossetia. He also said that IS fighters are planning attacks for New Year, targeting Russian border guards, as well as Georgian law enforcers and EU observers.

Sanakoyev did not specify the source of this claim.

Georgian representatives brought up an incident of a Russian helicopter that violated Georgian airspace a few days ago.

According to the Ministry of Reconciliation and Civic Equality, representatives of Georgia presented photo and video footage proving that the Russian helicopter violated Georgia-controlled airspace on December 10.

According to law enforcement ministries, an unmanned drone violated Georgian airspace on December 9, as the drone flew over the villages Koshka and Gugutiantkari in the Gori region, while an Mi-8 helicopter flew over the police station in the village Mereti, near Gori, the next day.

Tbilisi evaluated this as a provocative act by Russia that violated the fundamental norms and principles of international law.

The Foreign Ministry called on the Russian Federation to fulfill its obligations under the ceasefire agreement of August 12, 2008, signed after the five-day war with Georgia.

During this 61st IPRM meeting, the parties also discussed the issue of people still missing since the war in August, 2008.

Irakli Beraia, spokesperson for Georgia, said that two Georgian citizens are currently in the detention facility in Tskhinvali. One has been there since April, the other one since November.

According to the EU Monitoring Mission to Georgia (EUMM), the co-facilitators also called for a humanitarian approach and leniency towards the local population, particularly in view of the upcoming winter season.