Ukraine’s Avakov in shouting match with Saakashvili at council meeting

Ukraine’s Avakov in shouting match with Saakashvili at council meeting 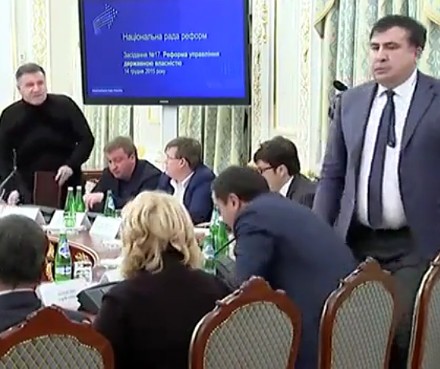 Mikheil Saakashvili (right) got up and left the meeting of the Reform Council after a shouting match with Arsen Avakov (left), who threw a glass of water at him.

TBILISI, DFWatch–Ukraine’s Interior Minister Arsen Avakov Wednesday published a video showing a quarrel between him and Mikheil Saakashvili, Governor of Odessa, and former President of Georgia.

The video shows them bickering and Avakov throwing a glass of water at Saakashvili, who continues calling him names.

The scandal took place during a session of the National Council of Reforms which was also attended by the Prime Minister of Ukraine Areniy Yatsenyuk. The subject of the confrontation was the privatization of a port facility in Odessa, a subject in which Saakashvili accused Avakov of corruption.

“I refrained from hitting him – splashed his face with water,” Avakov wrote on his Facebook page. “Enough artists and circus performers. It is necessary to plow and not to shoot the breeze.”

He also wrote that it is necessary to jail corrupt people instead of talking about them for months without any evidence.

“I am responsible for every word spoken there. It is time for actors who have brought the country to the brink, to be responsible for their words and actions,” Saakashvili responded.

Saakashvili said the prime minister, as well as Avakov, called on him to leave Ukraine.

“I am not leaving. I won’t let them rob my beloved Ukraine,” he said.