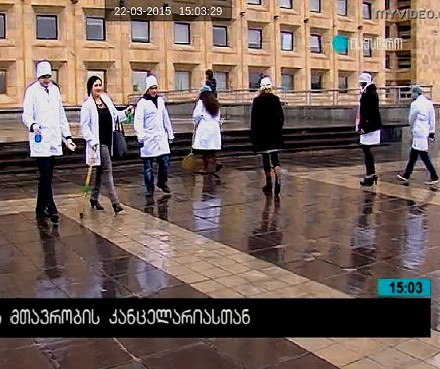 The square at the government office being ‘disinfected’. (Maestro.)

TBILISI, DFWatch–Activists Sunday ‘disinfected’ a square in Tbilisi where the National Movement had rallied the day before.

“We think they left behind bits of their unhealthy ideological views. Therefore  we decided to conduct a disinfection,” Irakli Kipiani told Maestro TV.

He and a handful of activists from Eurasian Institute dressed up in white lab coats and sprayed symbolic disinfectant around the square. Some carried brooms and other paraphernalia to ‘clean’ the plaza.

Eurasian Institute is a marginal group advocating Georgia’s membership in the Eurasian Union, a Russia-led trade and economic bloc.

The group has been seen sporadically in Tbilisi, demonstrating against the National Movement.

Georgia’s currency lari has dropped about thirty percent since November. This was promptly seized upon by the National Movement. On Saturday the party held a rally against the government’s economic policies, demanding its resignation.

Party leader and former President Mikheil Saakashvili spoke from Brussels via video link. He urged a crowd of some ten thousand people to overthrow the government, like they did in the Rose Revolution in 2003.

Saakashvili is wanted in his home country, but refuses to come home. He claims the charges are politically motivated.

Recently, the former leader was appointed adviser to President Poroshenko in Ukraine.