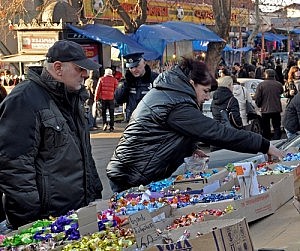 TBILISI, DFWatch–The lari, Georgia’s embattled national currency, showed signs of recovery on Thursday after both the National Bank and the government announced that they are taking measures to stop it from further depreciation.

In recent days, the national currency reached a low of between 2.40-2.50 laris per US dollar. The biggest problem, though, was that in the last few days the exchange rate has often been changing several times during the day.

On Wednesday, the government announced it would adjust the state budget to the lari’s new value. At the same time, the GDP growth forecast was reduced from 5 to 2 percent.

Further, the Finance Ministry will reduce spending in the 2015 budget, but it is so far not specified how much the approximately 9 billion laris budget will be reduced. Some experts have suggested reducing expenditures by at least half a billion laris.

It has been announced that social expenditures and infrastructure projects would not be affected. Even though the government promises to cut public spending by 12 percent, is insist this will not trigger layoffs of public servants.

Earlier the government aired its decision to sell off state properties to bring in new money. Among the properties to be sold are several building in downtown Tbilisi, the lucrative Lottery Company and state owned dachas in Krtsanisi street, adjacent to Krtsanisi state residence.

Economy Minister Irakli Kvirikashvili suggested that the sale of properties would enable the government to quickly bring in up to 350 million dollars.

Representatives of the IMF and the World Bank are currently visiting Tbilisi to observe the situation. Both organizations will present their recommendations on March 5.