Supporters and opponents of NATO clash in Tbilisi

Supporters and opponents of NATO clash in Tbilisi 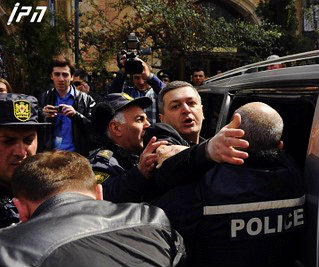 A group advocating the Russian-led Eurasian Union planned to demonstrate against NATO, but were interrupted by an angry crowd. (Interpressnews.)

TBILISI, DFWatch–Three people were detained in Tbilisi on Monday as supporters and opponents of NATO clashed outside the Cinema House.

Tension was already high during the screening of a 30 minutes long film about NATO’s bombing of Yugoslavia in 1999, organized by the Eurasian Institute.

The event was to mark the day fifteen years ago when NATO started its bombing campaign, as a response to ethnic cleansing of Kosovo Albanians.

A minor scuffle broke out as a young man went to the front of the cinema hall and accused the audience of being Russian agents.

Police were waiting outside and had formed a corridor to allow those inside to walk away without clashing with the crowd that had gathered, shouting that they were ‘Russian slaves’.

A correspondent for Expressnews reports that clashes broke out as someone from Eurasian Institute brought out posters with slogans against NATO, and a physical confrontation ensued as police were unable to keep the two sides apart.

Three people were detained for hooliganism, a so-called administrative violation, which means that the police have wider powers than for ordinary crime.

In the invitation to the event, Eurasian Institute, which support the Russia-led Eurasian Customs Union, said the film would show how NATO was ‘fighting not only against the Yugoslav state but also against the Orthodox civilization.’

The group claims NATO sidestepped international law and the UN and started bombing which led to ‘the destruction of Yugoslavia’. Further, that on Easter Day, in April, they dropped bombs with the inscription ‘Happy Easter.’ It says that infrastructure was destroyed, and claims 1,700 civilians were killed.

Then Kosovo broke away from Serbia with the help of the West, which created a precedent when the West supported separatism, argues the group, which describes itself as ‘against separatism and anti-Orthodox policies.’

Numerous Serbian churches and monasteries were destroyed in Kosovo, Eurasian Institute continues, and adds that the event’s slogan was “Serbian shrines – our shrines”.

The group was planning to hold an anti-NATO demonstration down Rustaveli Avenue, Tbilisi’s main thoroughfare, with posters criticizing NATO and remembering the Serbian people’s tragedy; ending at the National Library on Gudiashvili Street 7, outside the NATO Information Center.

Expressnews later reported that supporters and opponents of NATO were clashing at the National Library. Police were also present there.

A similar rally was also planned in Batumi on Monday.

In a 2008 referendum, 77 percent of Georgian voters supported the country seeking membership in NATO. In polls, support has been in the low 60s in 2012, but was around 80% last December.