Saakashvili supporters rally in Tbilisi against the government

Saakashvili supporters rally in Tbilisi against the government 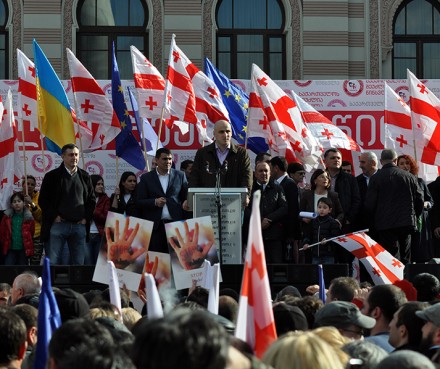 TBILISI, DFWatch–Tens of thousands of people rallied in Tbilisi on Saturday, demanding the government’s resignation.

People came to Tbilisi from faraway Samegrelo, Adjara and other regions.

Many arrived by bus. Organizers also paid for fuel for some who brought their own cars.

Demonstrators gathered at different sites around the center, then descended on Freedom Square, carrying Georgian and other flags, and a big EU flag.

On the stage, speakers included well-known UNM people as Davit Bakradze, who used to be speaker of parliament, Giga Bokeria, former secretary of the National Security Council, Nika Melia, who was a candidate for Tbilisi mayor last year, and MPs.

In their speeches, they mostly criticized the government for inaction, and for conducting a wrong economic policy. They also accused the government of being corrupt and promised that they will fight to change this situation.

Ex-President Mikheil Saakashvili appeared on a big screen, addressing people live from outside the EU parliament building in Brussels.

He said Georgia has a government which ‘covers up crime’ and drags the country into the abyss.

Recalling the Rose Revolution in 2003, when he and his National Movement deposed Eduard Shevardnadze through a revolution, he urged Georgians to force the government to step down.

“Today we have the same goal as in 2003; to save our country from a destructive government which is not able to build but is only able to demolish.”

Saakashvili is charged in four different criminal cases in Georgia, but refuses to come home to face the charges, claiming they are politically motivated. He is currently an adviser for the government in Kiev.

Davit Bakradze, MP from UNM, said the rallies will continue as this government should leave.

Afterward, the crowd moved to the government office where the rally dissolved without incidents. They symbolically left large and small red cards in front of the office, as a sign that the government should leave.

From 2007 to 2011, the National Movement government under Saakashvili was rocked by periodic demonstrations against its hard-handed rule that at times brought out several hundred thousand people demanding the government’s resignation, without being heeded. One of the crimes Saakashvili is charged with is ordering the brutal crack-down on anti-government protesters and the police storming of a TV station in 2007.

Yesterday, the party’s mayoral candidate Nika Melia claimed that 50,000 people showed up, which in his opinion is enough that the government should leave.

The prime minister and president were in Marneuli on Saturday, celebrating Novruz with the Azerbaijani community there.

In Tbilisi, there were two counter-demonstrations against the National Movement, one outside the Public Broadcaster building, another outside Sameba Cathedral. Aleksandre Kobaidze, a spokesperson for the former, told Maestro TV that they want to bring to justice the regime that terrorized the country for nine years.

“It’s important that we don’t forget the past,” he added.