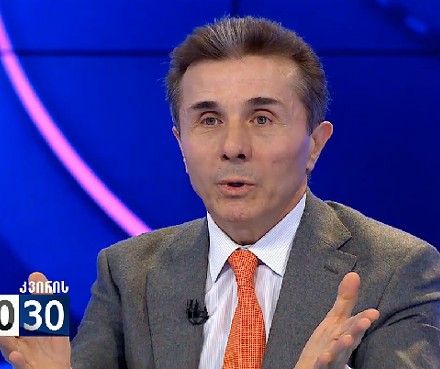 He appeared as one of the guests in the talk show ‘2030’ on his son’s TV channel GDS.

Saturday, the National Movement rallied some ten thousand in Tbilisi to demand the resignation of the coalition government, which was brought together by Ivanishvili in 2011.

“By gathering five to seven thousands people, in fact, they showed that they are alive,” the ex-PM said.

The National Movement has no basis for demanding that the government steps down, in his view.

Rally of the abusers

“Society demonstrated what a cultured people they are when they let abusers hold a rally,” he added.

UNM had been preparing for Saturday’s rally for one month, prompted by a sharp drop in the national currency lari, which it blamed on a failed economic policy.

People were bussed in from poorer regions where the former ruling party still has some influence left, after being voted out of power in 2012.

Demonstrators met up at different places, then descended on Freedom Square, waving Georgian and other countries’ flags and a big EU flag.

The rally’s climax was when their party leader ex-President Saakashvili appeared – via video link, because he can’t enter the country without being detained.

Saakashvili is wanted in connection with four criminal cases. One case is the violent dispersal of an anti-government rally in 2007.

The fight against crime during the National Movement, which tripled the number of prisoners, didn’t really root out corruption, in Ivanishvili’s view. Instead, it replaced low-level corruption with elite corruption.

And many innocents were put behind bars. What happened in the prisons is like a litmus test for the system the National Movement created, he said.

Most Georgians knew about the widespread prison torture, and the torture videos published before the 2012 election were not decisive, in his view.

UNM has no chance of returning to power, he predicted, as people ‘cannot easily forget’ what happened during the previous government.

“[UNM’s] euphoria is in vain. How can events be forgotten so soon? Do Georgians have nostalgia for what was happening in the prisons?” he asked rhetorically.

“We will never let this be repeated.”