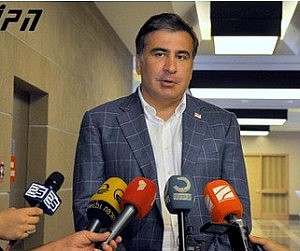 TBILISI, DFWatch–Former Georgian President Mikheil Saakashvili was Friday officially confirmed as adviser to the Ukrainian president, despite being wanted for crimes in his home country.

Saakashvili will be head of the Advisory International Council of Reforms, a body subordinate to Ukraine’s President Petro Poroshenko.

“The Advisory International Council of Reforms is a consultative body the main task of which is to elaborate proposals and recommendations on the implementation of reforms in Ukraine taking into account the best international experience,” a statement published on the official website of Poroshenko reads.

Prosecutors in Georgia have charged Saakashvili in four different criminal cases, which include covering up the murder of a 28 year old bank employee in 2006.

Toward the end of his nearly ten years term – the last year in a fragile power-sharing agreement with a hostile coalition – his rule became increasingly unpopular. The coalition, called Georgian Dream, won a landslide victory in 2012 on a promise to ‘restore justice’, and proceeded to put former officials on trial and free over half of all prisoners in the country based on the perception that there were too many miscarriages of justice to go through each case individually.

Last year also Saakashvili personally was charged. He is currently wanted for covering up the murder of bank employee Sandro Girgvliani in 2006, for ordering the beating of a parliamentarian in 2005, embezzlement of more than four million dollars, and for ordering the violent dispersal of an opposition rally and storming of a TV studio in 2008.

But Poroshenko hails the reforms under the National Movement leader.

“We’ve been thinking for a long time how to use the knowledge, experience and unique know-how of Mikheil Saakashvili in the best way,” Poroshenko’s statement reads.

It goes on to say that the Georgian ex-president carried out reforms in virtually all areas of economic, political and social life, particularly taking note of the police reforms, the education reforms and the justice reforms.

“We will not win if we do not build a new Ukraine today and do not implement new reforms. It is a pursuit in time. If new Ukraine comes true, Georgia will also be free,” Poroshenko’s official website quotes Saakashivili saying.

Poroshenko fired his advisor more than five days ago, when there were also reports that Saakashvili turned down an offer to be head of the anti-corruption bureau in Ukraine. In his new position, Saakashvili will not be required to obtain a Ukrainian citizenship, but may remain a Georgian citizen.

A few days ago, Saakashvili said in an interview with the TV station Dozhd that there are a number of Georgian ministers and officials in Ukraine’s new government, who are ‘busy conducting reforms.’

“For example our former Deputy Interior Minister Eka Zghuladze is now in charge for police reform,” he said, adding that people support her now. Many Georgians, he said, are busy with the justice reforms, to create a system of online tenders and other procedures.

Poroshenko first advised Mikheil Saakashvili to be advisor back in May 2014, but he declined, instead promising to assist them informally without having an official position.

Saakashvili is wanted by Georgia and the government is waiting for a response from Interpol in connection with a request for a Red Alert to apprehend him.

The Prosecutor General’s Office postponed the four trials until 2015.