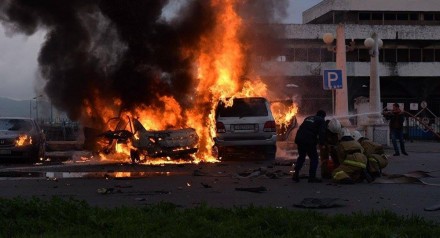 The car exploded on Sergei Bagapsh Square in downtown Sokhumi, close to the seafront.

‘MP Almas Japua’s car exploded. The causes are yet unknown. Currently, investigative measures are being taken at the scene. There are no victims’, Leonid Dzapshba, minister of internal affairs of Abkhazia said.

According to the witnesses, a woman who was passing by at the moment of the explosion suffered minor injuries and was taken by the ambulance.

MP Aslan Kwabakhia who arrived at the scene told journalists that the explosion could be caused by a variety of reasons, from a ‘conventional fire in the car’s wiring’ to a terrorist attack.

At least two other cars suffered collateral damages from the explosion.

Aslan Japua is a member of Abkhazia’s National Assembly from the opposition party Ainar. On 29 March, he put forward a motion of no confidence for prime minister Artur Amkwab.

Watch the video with the aftermath of the explosion here.