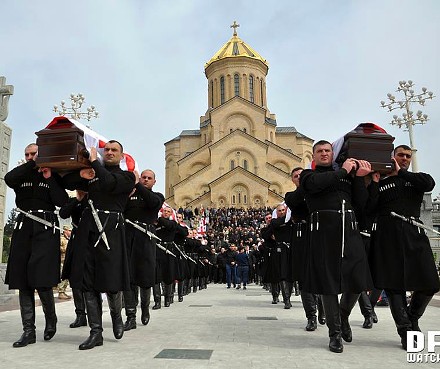 TBILISI, DFWatch–12 more bodies have been identified from the Babushara airport disaster during the 1992-1993 Abkhazian war. The bodies were buried at Brothers’ Cemetery in Tbilisi on Saturday April 9, when Georgia commemorates the victims of the tragedy of 9 April 1989.

Public funerals were held at Sameba Cathedral in Tbilisi on April 8-9, where family members, relatives and others paid tribute to the victims of the tragedy in Abkhazia.

Saturday, the day began with a public funeral at Sameba, where politicians from both the government and the opposition came to express their condolences to the families of victims.

Nine victims were buried with a military guard of honor at Brothers’ Cemetery in Dighomi, in northern Tbilisi. Three were buried at ancestral cemeteries. The burials were attended by the minister of refugees, the mayor of Tbilisi, the deputy defense minister and other politicians.

Refugee Minister Sozar Subari said that 208 bodies, which have been transferred from Abkhazia, are currently being identified.

By the facilitation of the Red Cross, a bilateral coordination group was created to study the issue of missing people during the conflict in 1992-1993. Within the negotiations, it was decided to identify the bodies of those buried on Babushara Brothers’ Cemetery.

43 bodies were identified by DNA. The Refugee Ministry said two more cemeteries will be established and more than 100 bodies will be transferred in 2016.

September 22, 1993, employees of the Security Ministry left for Sukhumi to participate in the evacuation of then President Eduard Shevardnadze, but the plane exploded at Babushara Airport in Sukhumi. 92 people died.

According to official figures, more than 2,000 people are still missing from the Georgia-Abkhazia conflict of the 1990s.