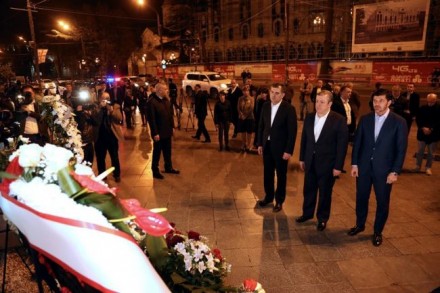 Members of the Georgian government gathered on Rustaveli Avenue in Tbilisi in order to commemorate victims of the tragedy of 9 April 1989.

Ministers from the Georgian government together with the prime minister gathered yesterday night in front of the Parliament building on Rustaveli Avenue in order to mark the 27th anniversary of the tragedy of 9 April 1989, InterPressNews reported.

‘9 April is a tragic and important day in Georgia’s most recent history. On that day, the foundation for Georgia’s was laid. Despite the fact that for past 25 years we’ve been struggling to achieve success and to integrate with Europe, we’re still facing the danger of the occupation of Georgia’s territory. We continue to fight liberation and, most importantly, it is a peaceful struggle. By peaceful means we will arrive at the point where our country is a sovereign and free state’, minister of foreign affairs Mikheil Janelidze said in front of the Parliament building in reference to the breakaway territories of Abkhazia and South Ossetia, which are considered to be under Russian occupation according to Georgian legislation.

‘This is the day which will be remembered as one of the most tragic pages of Georgia’s history, when countless young Georgians stood against and tried to stop the Soviet government in its full swing with their own bare hands. It was an example of self-defence and the blood which was shed on that day changed not only the direction of the country’s development, but also made Georgians believe that it was possible to firmly stand up against a superior power with courage on their side. Unfortunately, in the following years too many names were added to the list of heroes. 9 April will be the story of the heroism of these young people who tried to stop the tanks with their bare hands’, prime minister Giorgi Kvirikashvili said in his address.

The Day of National Unity is an annual public holiday marking the tragedy that took place on Rustaveli Avenue in Tbilisi on 9 April 1989, when a peaceful nationalist rally was violently dispersed by the Soviet Army. 21 people died, hundreds were injured, and even more suffered from poisoning by an unidentified gas.

Russian authorities have subsequently claimed that the victims of tragedy died not because of the army’s brutality, but because of the stampede that occurred after the clash.

The tragedy contributed to a widescale national awakening and inspired a chain of events that eventually led to Georgia’s independence.

The government under the leadership of nationalist leader and later president Zviad Gamsakhurdia declared independence from the Soviet Union on 9 April 1991, the second