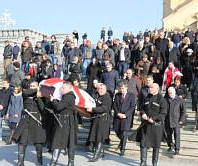 TBILISI, DFWatch–Five more victims of a plane disaster during the Abkhazian war in 1993 were buried in Tbilisi on Tuesday after being recovered from a cemetery inside the breakaway region.

The funeral service was held at the Sameba Cathedral and was attended by families of the victims as well as the refugee minister and the deputy reconciliation minister.

Cooperation to identify victims and give them a proper burial is perhaps the only current example of cordial relations between Tbilisi and Sukhumi. Georgia and Abkhazia agreed to create a bilateral coordination group in 2010 in order to work on identifying people still missing from the war in 1992-1993.

September 22, 1993, employees of the Security Ministry left for Sukhumi to participate in the evacuation of Eduard Shevardnadze, but the plane exploded at Babushara Airport in Sukhumi.

A decision was made by the coordination group to identify and transfer bodies of victims who died in the explosion.

In December, four bodies were identified and buried at the Brothers Cemetery.