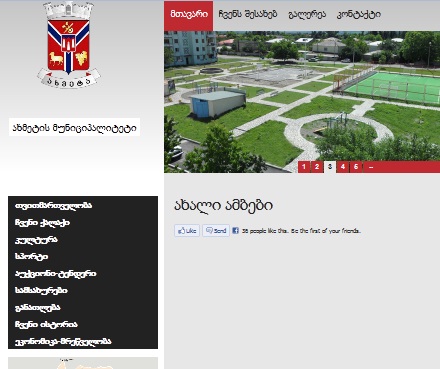 The website of Akhmeta often published news with headlines deriding the opposition. Friday evening, the website was unavailable. In Google's cache (above), the news section was empty.

According to GYLA, the fact that these web sites publish information about UNM’s activities means that there is no border between political party and government. This violates the principle of non-partisan public service.

The information being published is about UNM’s campaign meetings, where sometimes members of the ruling party call on people to defy the opposition.

GYLA revealed 14 websites with content which does not comply with election legislation. They are doing campaigning only for the ruling party, never for the opposition.

One of these sites published many photos of Merab Janelidze, a representative of the ruling party, wearing a campaign t-shirt, and a lot of pro-UNM events.

The website of Zugdidi, a town in western Georgia, published a press release which described a campaign meeting for the ruling party in positive terms.

The website of Akhmeta, a village which lies in the east of Georgia, often publishes press releases with headings that express a negative attitude toward opposition parties: “Provocation of Dreamers” (opposition coalition Georgian Dream), “Soviet Nostalgia of Georgian Dream” etc.

All these 14 web sites violated articles 48 and 49 of the election code, and GYLA thinks that the responsible persons should be fined with 2 000 lari, or 1 200 USD.

GYLA calls on the Central Election Commission to study these cases immediately and take measures envisaged by law.