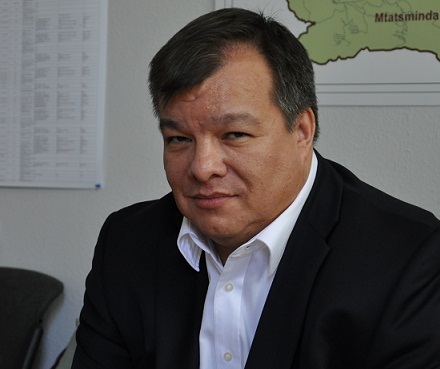 What are the main differences which occurred for the last survey compared to the last two surveys conducted by NDI?

Most notable change since our last poll is that people’s attitudes about Georgian democracy improved. So what we have seen over time is that people’s opinions about Georgian democracy have increased in recent years, then dipped in our poll in June 2012 and then seemed to have climbed a bit in our August 2012 poll. However, at no time have a majority of Georgians assessed Georgia as a democracy now, since we began polling in 2008.

Let’s say one example – last year only 51 percent of questioned were willing to vote if there were elections tomorrow, now the number is 77. In your opinion what caused such an increase? Maybe some latest events or just the fact that elections are get closer?

I think it’s a combination of factors. We always see an increase in interest in parliamentary elections as they get closer, but I think it’s clear that the fact that there has been such a large competitor in the context of the Georgian Dream, you know it certainly has increased people’s interest. Now increased interest does not necessarily mean increased support, but where we are is that there has been increased interest in the election and at least in part as a function of people see this is a more competitive race.

Jobs, health care and territorial integrity have typically been the top three issues. Back in September of 2011 and again in February of this year, rising prices and inflation were notable issues, however, the importance of that issue has declined as the year has gone.

How do you think did NDI’s or other surveys had some kind of influence on election programs of the National Movement and the Georgian Dream, because in both programs most important issues are named jobs, health-care and agriculture, while National Movement always used to have more liberal type of priorities in its programs earlier?

We would hope that both parties would spend more time talking about issues that matter to voters, because in this most recent poll 53 percent of Georgians are unaware of what Merabishvili is proposing and 78 percent of Georgians are unaware of program that Bidzina Ivanishvili is promoting. So in both of these instances you have majorities of Georgians who are unaware of what two largest parties are proposing to do; and so while our poll we hope has helped to focus both sides in terms of addressing issues that people care about clearly both sides have to do a better job of communicating to voters about what it is they intend to do if they win the elections.

Can it be the reason that in the regions there is less access to TV channels?

No, because the polling results regarding Maestro and Global TV demonstrate that people know about these issues and have an opinion about these issues, despite the fact that they don’t receive either Maestro or Global TV; so I think while media is obviously an issue of concern in terms of Georgia’s democratic development; I think too often it is used as an excuse by people for not doing a better job of communicating their positions.

What are people’s expectations regarding upcoming parliament elections to look at the results of last poll?

That’s hard to say. I mean, I think most citizens would hope that people will address the issues of the greatest concern to them; we see that Georgians want to hear more about rising prices and inflation; they want to hear more about the linkage of trash and electricity bills; they want to hear more about transportation and communal service costs; they think that relations with Russia have gotten worse. So these are all issues that I think people are hoping that political parties, including other electoral subjects like Labor, New Rights, Christian Democratic Party… People want to see answers from those people who would seek to represent them, and that’s not an uncommon demand by citizens of politicians.

There were published many surveys published by organizations on orders/დაკვეთა Georgian Dream, by the National Movement, IRI and NDI. There are really significant differences between the results of those surveys. (36 percent supports the National Movement by NDI; Greenberg has 57 percent, Penn Schoen Berland – 41 percent). What is the reason to such difference, maybe different methodology?

A simple reason may simply be looking at the dates in which the poll was taken. So every poll defines itself only by the period of time in which it takes place. So if you have polls, which are even a week apart – an incident or activity or discussion in those communities may be very different one week from the next. That’s one possibility. Second possibility is the methodology by which you’re looking for answers. We place emphasis on having a random representative sample. What does that mean: it means that we do not use substitution. If I come to your house I will try three times to interview you. If I can’t interview you, I don’t then interview somebody else in your house. I’m randomly selecting your household. Not all polling forms do that. So then you’re getting sort of a different picture, because now you’re not as worried about whether or not your poll is representative as it is random. Random is one quality, representative is another quality and so differences in methodology can have differences in terms of outcome. So when is the poll done – it’s a difference; what are the emphases in terms of the methodology – makes differences. But what I would point out is that in all of these polls what they have in common is that they reflect similar trends. So, polls for example in June and July all intended to show an increasing support for the Georgian Dream and decreasing support for the National Movement. So now we will see what the combined effect is; the polls have been taken in August and later and again, people make a mistake of thinking of polls as been predictive. They are not crystal balls, okay? All they can do is tell you what a situation was in a moment of time and if you can see trends over that period of time you may then be able to extrapolate what the trend may become Election Day. You cannot say for sure – this will be this much and that would be that much.

In a period before elections and after elections it is really popular to take numbers from polls, in society people like to quote from polls, but lately there are talks about fact that people do not trust surveys that much. So how your organization provides trust for their surveys?

There is no magic to it. In a polarized political environment, which I think is fair to say that Georgia is, there is a tendency for people to not want to hear perspective that challenges their own. They want to see a perspective that reflects them. So people take issue with a poll, because they don’t like all the answers in it; because I don’t like the answers – I don’t trust it – well that’s right, you can, but it doesn’t say anything about the accuracy of the poll.

Sociologists and some critics always criticize surveys as there are incompatibilities between the answers of questioned in it. For example people say there is a democracy in a country, but aren’t satisfied with their lives. What may cause this?

I would say this: number one – saying how you are better off or worse off than you were four years ago is not the same question whether or not the country is going in the right direction. One is looking backwards, one is looking forwards. So I can say that I had very rough life, but I think things will be better in the future. I can say that things have been bad in the past, but I think as in the case of the question – does the current government makes changes that matter to you – So I can say that things have been bad, I think government is making changes that matter and therefore I think that the future is good. People who think this is illogical, people who cannot step outside of their own partisan ideological perspective – the problem that most sociologists have in Georgia is that they think that elites determine what people think. They don’t. People determine what people think. People have much more nuanced and sophisticated perspectives than most elites are willing to concede? 12:12. So people say that well because you think this on this one question, then you must think everything else on every other question. People aren’t robots; most people are not political so that is an illogical expectation.

What I am supposed to believe then is that – here is what this argument wants me to believe: this argument wants me to believe that I allow someone to come into my home for an hour and a half; ask questions and write them down and in that hour and a half what I am going to decide is.. First of all if I am afraid then why do I let them in the door; OK I let them in the door, I’m afraid to answer specific question, maybe I just think it’s none of your business, why is it that I have to be afraid. If I say that I don’t know – I hear people say that don’t know means you’re afraid – well ‘don’t know’ last I checked just means ‘I don’t know’. So, some people can actually not know what it is they think about an issue or what position they are going to support. Refuse to answer means – I’ve made up my mind about something or I have a choice, but I’m not going to tell you. Deciding whether or not that’s fear or whether or not that’s privacy, says more about the people who are making those analyses than it does about the person who is making this choice. If you then also go so far to say that people say don’t know because they’ve been political and they’re really afraid, again that to me says more to me about the people who are making this allegation then it does about the person who says it, because I don’t know anyone who knows everything and anyone who does usually is a fool.

The previous question was about differences between the answers because of fear, but now could you say how you know that people weren’t worried or scared to give answers at all during the interview? When a person lets you in, maybe they do not know what the questions may be and then may avoid the answers?