EU to open its borders to Georgians

EU to open its borders to Georgians 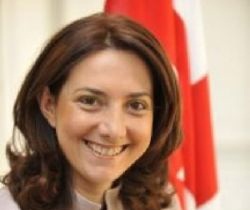 TBILISI, DFWatch – The European Union will offer Georgian citizens visa free travel to the EU in 2013, according to Georgia’s representative to the EU.

Salome Samadashvili, who represents Georgia in the EU, said Wednesday that 2013 will be a very important year for Georgia.

“At the end of 2013 we plan to finish negotiations about an association agreement and negotiations about a deep and comprehensive free trade agreement. In the second half of 2013, the head of the EU will be our friend country Lithuania and a summit will be held in Vilnius. At this summit we think that we will finish stages on important issues with EU by our relations,” she said.

Keti Tsikhelashvili, chair of Liberal Academy Tbilisi, thinks this is not realistic, but the statement needs to be positively perceived.

If we are to believe analysts, those terms are changed to avoid expectations about the same terms.

Unlike the Balkan countries, Georgia’s action plan contains two stages instead of one, and Keti Tsikhelashvili says it of course expands the terms of implementation.

“In this case what the government says, we will have to conduct immediate reforms, including legislative amendments. Clearly, part of it is already conducted.”

She says the action plan considers putting the issue of migration in order, also security, human rights issues and other directions. There is no official data about Georgian emigrants abroad, while there are reports about a large number of illegal Georgian migrants, but the exact figures aren’t known. Unofficially there are up to a million Georgians living and working abroad.

In the case of Moldova, the country received an action plan two years ago. They finished the first stage and will receive conclusion about the first stage. After that they will go to the second phase.

Keti Tsikhelashvili explains to DF Watch that the statement seems a bit unrealistic, but of course it is country’s desire that the process finished as soon as possible, but Georgia still has a lot to do.

“But the statement is positive – if Georgia hopes that by 2013 there will be visa-free rules with EU it seems that the issue becomes priority for the country, which means that Georgia will accelerate reforms and get closer to European standards.”

She says country should receive action plan by the end of 2012, when Georgia will have to go through two stages.

Georgia had signed agreement with EU about visa facilitation and readmission, which came to force in March of 2011. Head of Liberal Academy says it may be considered as one of the component of negotiations, which is positively rated.

“But to solve migration issues is now more important, but in general I think government’s statement is a bit ambitious and not quite realistic; however it is a sign if it really be perceived as a priority, which will cause conducting reforms in accelerated regime.”