William Courtney: It won’t be easy for Trump to make big changes in US policy towards Russia

William Courtney: It won’t be easy for Trump to make big changes in US policy towards Russia 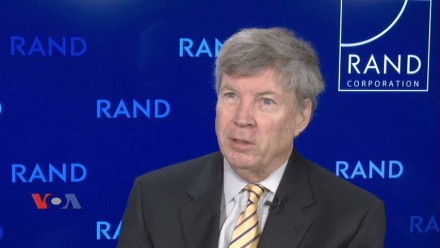 William Courtney: “Because of such wide Western consensus for sanctions against Russia, it will not be easy for the Trump administration to make big changes in that policy.”

William Courtney, Former US Ambassador to Georgia and currently with the RAND Corporation in Washington DC, shared his views on the US President Elect Donald Trump’s foreign policy agenda with Anna Kalandadze of Voice of America’s Georgian service.

RAND Corporation (Research AND Development) is an American think tank partially funded by the U.S. government.

Interview in Georgian ran on the VOA program, here is an English version:

VoA:  What kind of the US Engagement with Russia should there be, if any, or is likely to be under Pres. Trump?

Amb. William Courtney, Rand Corporation:  There will be engagement on a lot of tough issues but the question is whether Russia is willing to negotiate with President Trump once he takes office or whether Russia expects one-sided concessions, e.g. Ukraine, a very important issue where the war is going on, Russian forces and proxies are showing into Ukraine every day;  In Syria, in Eastern Aleppo where Russian and Syrian forces have been firing into civilian areas;  there is a violation of Nuclear Arms  Treaty, called Intermediate Range Nuclear Forces Treaty; and last, a more recent concern – cyber-attacks and Russian hacking into the US political process, democratic national committee and elsewhere; so all those issues will be on the table.

What other changes do you see coming under the future administration with regards to foreign policy (Ukraine, Georgia)?

New Administration will still be gathering its positions, shaping positions.  So it is difficult and early to predict… In general, the Trump administration may try to pull back some of the US engagement abroad.  On the other hand, like all other previous administrations – Democratic or Republican – the future US Administration will find that NATO is a critical pillar of Western security and will likely want to continue the cooperation and take NATO very seriously…  As you know there is a widespread support in Europe for sanctions against Russia for its aggression in Eastern Ukraine and its annexation of Crimea, and I would imagine US and European support for sanctions to continue.

Overall, it’s too hard to speculate about specific issues.  Georgia and Ukraine are eager to move closer to Europe; Georgia also wants to join NATO.  The county is not ready, its still poor compared to NATO members but I think the next Administration, like previously, will support Georgia’s Western aspirations.

How do you see the future US President working with the NATO, what differences might there be in the transatlantic unity on relevant issues?

Well, because of such wide Western consensus for sanctions against Russia, it will not be easy for the Trump administration to make big changes in that policy.  I think both Europe and America will be looking for Russia to pull out of Eastern Ukraine if Russia wants the economic sanctions – affecting finance, energy and defense sectors – to be removed.  That will be a big help for the Russian economy. We’ll see whether Russia wants to do that.  Thus far there is no sign that Moscow is trying to end military occupation of Eastern Ukraine.

Also, President-elect Trump has indicated he would expect NATO members to do more for NATO’s common defense.  President Obama has sought to persuade NATO members to do that as well.  Every previous US Republican or Democratic Administration since President Truman has given strong support to NATO.  I do not see that changing.

How do you understand the results of US elections, what were the decisive factors for such an outcome?

There is a long tradition in US of an alteration of political power. Franklin Roosevelt and Harry Truman led an uninterrupted period of Democratic Party in power, but since then there has been a lot of alternation in power.

Generally speaking, Americans like to have some  change so I think a good part of what we are seeing is a desire by Americans to see that change in the Washington establishment and a new look at some key issues such as immigration, health policy, trade, so this is really normal.

I remember when President Reagan came to power, there was a shock in Washington because a lot of the policies by Carter administration had seem to be established by partisan politics.  President Reagan decided that US had to be more assertive with Soviet Union but liberal in improving its economy, so this is really normal for the United States.