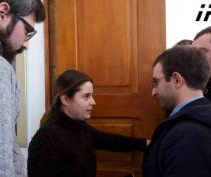 TBILISI, DFWatch–Student at Tbilisi’s largest university began another round of protest this week, breaking into building number 6 of TSU and refusing to leave until there are reforms of the education system.

Using the same name as the ad hoc group during a wave of protests last spring, the students of ‘Auditorium 115’ called out the government for failing to fulfill promises given to them then.

They also want the election for student government on Friday annulled and the body changed into a student council, as they think there has been misspending of university money.

About 20 student activists broke into the building and warned that they will resist holding the election for student government. As a tradition, Auditorium 115 displayed a massive red banner with the message: ‘We want education reform.’

Their main demands are that parliament must consider a bill proposed by the students to amend the law on higher education which will abolish the student government body and replace it with student councils.

Among their other demands are to renovate the student dormitories and increase the funding for science.

“A series of negotiations between Auditorium 115 and the state ended without any results. Despite a number of promises, the government did not fulfill any of our demands,” Auditorium 115 wrote in a statement.

“We all remember the statements from top officials, including the prime minister, claiming that our demands were legitimate and promising to fulfill them.”