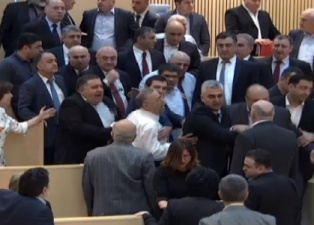 The boycott declared by the UNM  was preceded by a squabble during the plenary session.

Tbilisi, DFWatch – United National Movement has announced its decision to suspend its activities in the parliament until all involved in violent incident in Kortskheli were punished. They will carry on their boycott up to October 8 elections.

After a verbal squabble with Georgian Dream MPs during a plenary session On Wednesday, UNM members gathered at the Parliament’s hall.

“Until are identified real culprits, those who ordered [Kortskheli Incident], as well as who acted violently that day, we declare boycott [of parliament sittings],” Sergo Ratiani, UNM Executive Secretary, surrounded by the members of parliament’s UNM-affiliated factions.

“The government does not understand that the reality has changed and people are just telling it ‘no’… and now wants to use violence against the people’s choice”, – Ratiani said.

Earlier, during the plenary session several MPs from both sides participated in the verbal squabble (First Channel), which was culminated in a downright conflict between Zurab Zviadauri of GD, an Olympic Champion in judo in Athens, and Tariel Londaridze of UNM, retired military colonel.

It was preceded by Zaza Papuashvili of GD, a professional theatrical and movie actor, calling on parliament to commemorate the death of people killed during May 26, 2011, crackdown on opposition demonstration by army and police special forces, by minute of silence.

UNM MPs declined to stand up during this procedure, that prompted a verbal squabble with GD MPs.