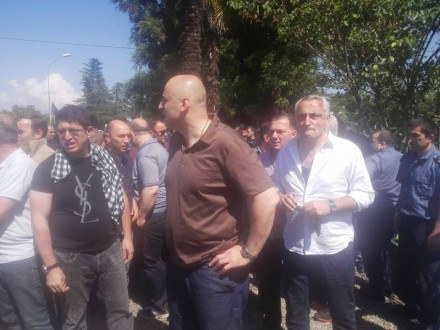 Nika Melia (center) and Tengiz Gunava, MP, (right) in Kirtskheli after the incident. (2030)

Tblisi, DFWatch- Members of the opposition United National Movement, including several high profile figures at the party, were brutally beaten in Samegrelo on Sunday.

The scuffle broke out in Kortskheli, a village near Zugdidi, administrative center of Samegrelo-Zemo Svaneti, where several leading members of the UNM, including MPs, were visiting a polling station.

A video distributed by 2030 depicts brutal battering of former Tbilisi Mayoral candidate of the UNM, Nika Melia [a tall bald man with white shirt] and party’s Foreign Relations Secretary, Giga Bokeria [a man in dark grey suit]. According to Rustavi 2 other UNM MPs – Akaki Minashvili, Nugzar Tsiklauri, Eka Kherkheulidze and Tengiz Gunava, as well as local activists, were beaten too.

Later a new, extended video was released by local Odishi TV. The footage demonstrates that the fight erupted after an unidentified person slaps at Nika Melia of UNM. It also shows assault on Tengiz Gunava [9:24], former Governor of Samegrelo-Zemo Svaneti. Gunava, who was a chief of Samegrelo police before his appointment as a governor, was arrested in 2013 and soon pardoned by then president, Mikheil Saakashvili.

Irma Nadirashvili, MP, who was present at the scene, said the assault was perpetrated by ‘boxers and rugby players deliberately brought [from Tbilisi]’ by the authorities. She said that personally called police several times but in vain.

“Leaders of UNM are trying to artificially raise tensions in some areas, and try to organize provocations,” Kakha Kaladze, Deputy PM and Secretary General of the ruling Georgian Dream – Democratic Georgia stated at the briefing.

The Ministry of Internal Affairs opened a criminal case on the fact of physical assault.