Trump about Kim: I like him, he’s a funny guy, very smart

Trump about Kim: I like him, he’s a funny guy, very smart 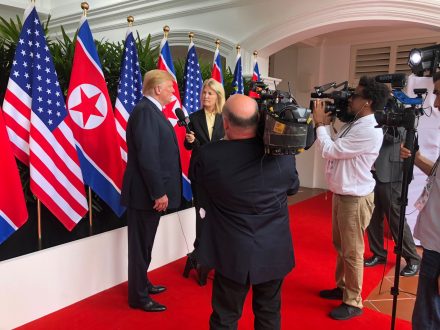 President Donald Trump spoke with VOA contributor Greta Van Susteren after his summit talks with North Korean leader Kim Jong Un in Singapore about what the two discussed and what to expect next.

Van Susteren: What surprised you about Kim Jong Un?

Trump: Really, he’s got a great personality. He’s a funny guy, he’s a very smart, he’s a great negotiator. He loves his people, not that I’m surprised by that, but he loves his people. And I think that we have the start of an amazing deal. We’re going to denuke North Korea. It’s going to start immediately and a lot of other things are happening, including the getting the remains back. You know – that’s been –  know you’ve been so involved in North Korea, but getting the remains back, Greta, is so important to so many people. They’ve called me, they wrote me letters, “Please can you do it?” and he’s agreed to do that, thousands of people so – who died in the war – so that’s a big deal.

Van Susteren: So you put the human rights issue on the table today and he reacted how?

Trump: Very well. I mean, we obviously were talking about the denuclearization 90 percent of the time, but we put a lot of other things, including human rights were mentioned, getting the remains back were a big factor, in fact we put it in the document, we were able to get that in the document, we got a lot of good things in that document, that was far beyond what anyone thought was going to happen.

Van Susteren: What about our troops? Are they staying in South Korea?

Trump: Yeah they are going to stay. We didn’t even discuss that. We are going to get out of the war games that cost so much money. You know where we – cause I think number one, it’s very provocative, and I want to do it, and I think they’re very happy about it because it is so provocative. But it cost a fortune to do it. And we won’t do that as long as we are negotiating in good faith.

Van Susteren: What brought Kim to the table this time after sable-rattling over decades?

Trump: Well actually I don’t think there’s been too much sable-rattling, prior to me I don’t think, they basically had a silencio attitude, silence, they didn’t want to talk about it and you can’t do that. And I think the initial rhetoric was very important. Frankly, as much as I hated to do it and as much as some people thought I was doing the wrong thing. I think without that, we wouldn’t be here. I also think he really wants to make a deal, he wants to do something.

Van Susteren: But why?

Trump: Because he knows that we mean business. I don’t think he felt that in the past. I think in the past, look it was different people, it didn’t work out. But he knows that we want to do business, we have to do business and we will do business. And now we do have – it’s been you know not a long time – although you could say from day one, we’ve been talking about North Korea in a tough manner. But I think we signed a document today which was far, far greater and more comprehensive than people thought. Nobody thought this was possible.

Van Susteren: What do you think he thought of you after he left?

Trump: I think he liked me and I like him. And I understand the past and, you know, nobody has to tell me, he’s a rough guy. He has to be a rough guy or he has been a rough person. But we got along very well. He’s smart, loves his people, he loves his country. He wants a lot of good things and that’s why he’s doing this.
Van Susteren: But he’s starved them. He’s been brutal to them. He still loves his people?

Trump: Well, I think you have somebody that has a great feeling for them. He wants to do right by them and we got along really well. We had a great chemistry—you understand how I feel about chemistry. It’s very important. I mean, I know people where there is no chemistry no matter what you do you just don’t have it. We had it right from the beginning, I talked about that and I think great things are going to happen for North Korea.