Think-tank: Georgian business should reorient away from Russia, towards the EU

Think-tank: Georgian business should reorient away from Russia, towards the EU 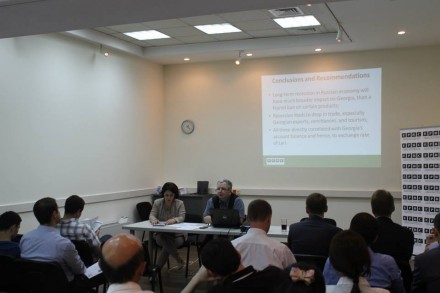 Presentation of the EPRC report at OSGF office on Tuesday (EPRC)

Tbilisi, DFWatch – Georgian government and business should switch their focus away from the trade with Russia towards taking full advantage of the opportunities created by the free trade agreement with the European Union, the report by Economic Policy Research Center (EPRC), a Tbilisi-based think-tank, concludes.

The report, FOCUS on Russia- Georgia under Russian Expansionism and Financial Crisis, was presented on Tuesday at the office of Open Society Georgia Foundation, which supports the project. It focuses on challenges of the Russian economy, as well as Russia-Georgia’s economic ties, Russia’s financial crisis influencing Georgia’s trade, investments, money transfer, tourism and energy sectors, as well as on possible risks.

Although Georgian economy is not as dependent on Russia as it was in 1990s, but Russia is still the second largest trade partner and major source of remittances, the report reads.

Georgia and Russia do not have diplomatic relations since the August War, 2008, but before that in 2006, immediately after detention of Russian citizens by the Georgian counter-intelligence for espionage,  Russia imposed embargo on Georgian wine and other products, justifying it ostensibly by their low quality. This step was accompanied by the waves of deportations of Georgians from Moscow and other cities.

Now the authors of the report believe that another embargo from Moscow is not anticipated at this stage, but Georgian wine and mineral water companies, the main exporters o Russia, are better prepared for it.

“Today, both wine and mineral water exports are more diversified and of a better quality. This does not apply to Georgian fruit and herb exports though,” the report reads.

However, according to the document, long-term recession of the Russian economy may have much broader negative impact on Georgia then possible ban of products and can be manifested in drop in trade, exports and tourism.

The report offers recommendations for the government and private companies to get prepared for imminent decline in trade with Russia, Ukraine and other post-Soviet states and “take full advantage of the opportunities created by the free trade agreement with the European Union.”

“Although Russia was never a major source of direct investments in Georgia, current sanctions and recession may motivate both large Russian companies and small businesses to either diversify their portfolio and invest in Georgia or completely relocate their operations to Georgia,” the authors add.

The full report in English is available here: http://www.eprc.ge/admin/editor/uploads/files/Russia_A5_WEB.pdf

The presentation of the report was held at in Tbilisi.