Dead zoo animals pulled out of river in Tbilisi

Dead zoo animals pulled out of river in Tbilisi 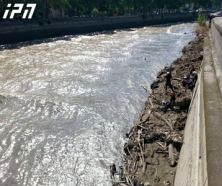 TBILISI, DFWatch–Rescue workers on Tuesday pulled a number of dead animals out of the river Mtkvari in Tbilisi, while looking for victims of the June 14 flood.

19 people died in the flood, while three are still missing.

Apart from the human victims, also many animals perished, as the city’s zoo was hit by a tsunami-like flood wave.

Among the animals discovered were a bear and a pony from the city’s zoo, as well as 18 dogs.

A tiger which has been missing since the night of the flood was not found in the river.

Tbilisi Zoo lost more than 50 percent of its animals, and part of the compound was entirely destroyed.

The zoo has been searching for a missing hyena and tiger. The hyena was found dead earlier, but the tiger is still missing.

Much mud and dirt remains in the zoo’s enclosures where predators were kept. It is therefore a possibility that the tiger is dead and buried in mud.

But uncertainty lingers over the tiger’s whereabouts. A few days after the flood, a white tiger which was thought to be dead attacked and killed a man in a warehouse and was quickly put down.