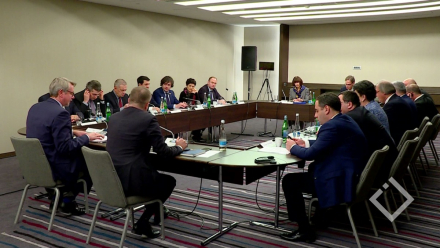 The second round of negotiations between the Georgian government and opposition was concluded Sunday late evening with a slight progress amid growing pressure from western politicians and diplomats.

The ruling party Georgian Dream has grudgingly agreed to discuss establishment of multi-mandate majoritarian electoral districts instead of single-member ones.

“The ice has started to melt,” Giorgi Vashadze of opposition political party of New Georgia was quoted by IPN as saying.

“There are signs that we are returning to a normal political process,” said Archil Talakvadze, the speaker of parliament.

The government representatives at the negotiations insist the much touted German model is off the agenda as it contradicts the constitution. But say that introduction of multi-mandate electoral districts is “discussable”.

This is a formidable step forward toward achieving a compromise as previously the Georgian Dream flatly ruled out any changes in electoral system.

Both sides agree to discuss the details among their ranks and then resume negotiations.

The negotiations between the government and opposition are being pushed ahead by the western diplomats who, it seems, are really concerned with the political impasse happening in the country.

Carl Hartzell, the EU Ambassador, and Elizabeth Rood, Chargé d’Affaires at the US embassy, were present at the meeting along with other diplomats.

“We appreciate the voice of the united opposition and call on the authorities to be responsible and open for cooperation,” Lithuanian MEP Petras Austrevicius said on Sunday.

Another Lithuanian MEP, Andrius Kubilius, has openly put the blame on the government, IPN reports.

Both MEPs made their statements in Tbilisi at the 8th Ordinary Session of the Euronest Parliamentary Assembly.

“I support the calls of protesters in #Georgia for a more democratic, prosperous, and pro-Western future for their country and call on Georgia Dream to resolve the current political impasse and deliver electoral reform in the wider interest of the country’s democratic development,” ALDE president Hans van Baalen posted on Twitter.