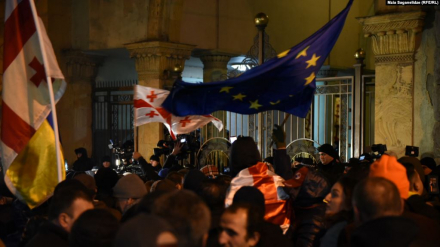 Rally at the parliament. (RFE/RL)

TBILISI, DFWatch–The confrontation between the Georgian Dream (GD) government and the opposition appears to have reached a point of no return, as the former on Monday flatly ruled out any chance of changing the electoral system.

Kakha Kaladze, the Tbilisi mayor who has been front man for the GD the last few days, said at his Monday briefing that the issue “is closed” and the 2020 general elections will be held according to a mixed, half majoritatian and half proportional, system.

That immediately fueled outrage among the opposition, who rushed to the parliament building in central Tbilisi and surrounded it determined to thwart a parliament session planned on Tuesday. The informal coalition of opposition forces included even political forces that are often labeled pro-Russian.

The opposition also pledges to hold “permanent” rallies and disrupt the activities of state institutions.

The government deployed police forces both inside and outside parliament building. Minor scuffles occurred throughout Tuesday night.

Two opposition MPs from European Georgia, Giga Bokeria and Tengiz Gunava, were briefly detained by the police at night.

The opposition had still kept their hopes up Monday that a compromise might be reached with the government over the electoral system change, a cornerstone of the latest political crisis in Georgia. The whole political spectrum awaited with interest a meeting at ruling party headquarters to discuss the political situation in the country. Bidzina Ivanishvili, GD strongman, was reportedly present at the meeting.

However, all hopes vanished after GD Secretary General Kakha Kaladze categorically ruled out abolishing the majoritarian system by the 2020 elections.

“The issue is closed. By 2020, a mixed electoral system will be maintained that fully complies with democratic principles, and therefore the political spectrum should devote all its efforts to preparing for the elections,” Kaladze said.

The switch to the proportional system, a long-standing demand by almost the entire opposition spectrum, was a promise by the ruling Georgian Dream party in the wake of “Gavrilov Night” protests in June. However, when it came to vote for the changes, GD failed to stick to its promise during the vote in parliament on November 14.

Since then, almost the entire opposition spectrum has been holding rallies throughout Georgia demanding that the government honor its promise. Dozens have been jailed, and several have sustained various injuries during the rallies. Many civil society groups and youth movements have also joined the protest rallies.

37 people were detained in Tbilisi after riot police dispersed a group of opposition activists blocking the parliament on November 19.