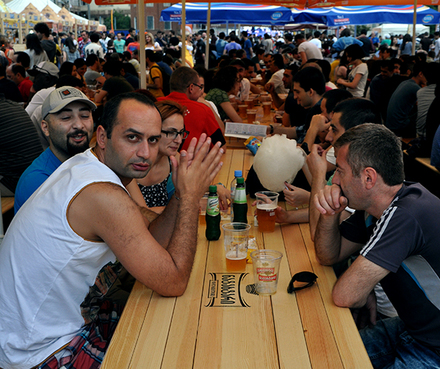 TBILISI, DFWatch–Tbilisi beer festival was held July 12-13 for the fifth year. It brought together thousands of people to drink beer, play games, listen to live performances and watch the World Cup final on a big screen.

As usual, people could buy tokens as they entered the festival area on Roses Square, and use the plastic coins to buy beer inside, where some of the brands offered were Natakhtari, Kozel, Mtieli and Efes.

There were performances from a stage by Elene Kalandadze, the Jetberd, Ara and Kvela on Saturday. 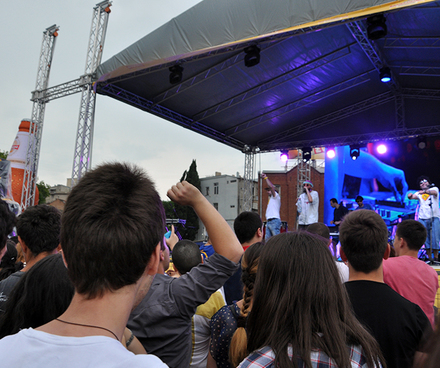 Another regular feature of the festival was beer drinking competitions and other games.

Nessie came with her friends, as she does almost every year.

“I see everyone together here and I don’t usually get to see them together every day at once,” she tells us. “I also love beer, obviously, since I am here. I meet up with my friends. We get together to drink beer and have fun.”

Irakli says the festival makes the same mistakes almost every year: Prices for beer are too high and young people don’t usually have enough money to afford it. It has become sort of a tradition to sit on the stairs of a nearby supermarket with beer bought there and listen to the music from outside.

His friend said another strange thing is that inside the festival area there is almost no snacks to be bought, to go along with the beer.

Agnieszka and Tomasz from Poland are visiting Georgia for a couple of weeks. They tell us they are lucky because the beer festival coincides with their three-day stay in Tbilisi.

“It is really nice here. We came here yesterday too. We are beer admirers, we enjoy music and cool people, which you can meet a lot of here,” Tomasz says. He and Agnieszka tomorrow plan to go and visit the Kazbegi mountains.